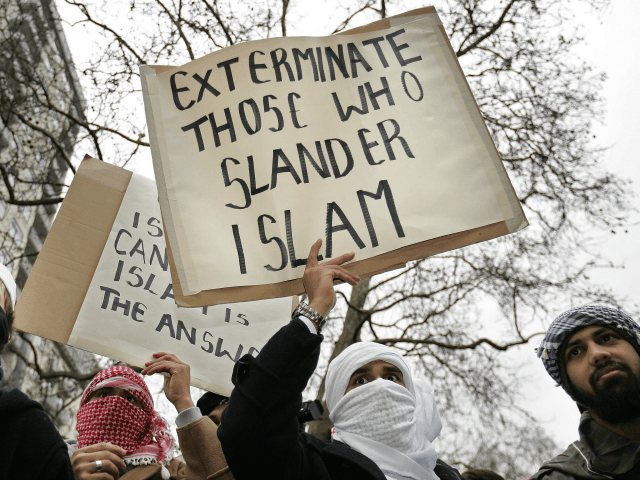 UKIP leader Gerard Batten MEP has slammed the European Court of Human Rights for upholding an Austrian woman’s conviction for disparaging Mohammed, Prophet of Islam, ruling they had the right to restrict her free speech.

The woman, named as E.S. in the European court’s judgement, had suggested the Prophet Mohammed was a paedophile due to his relationship with his wife Aisha, who was married to the religious leader aged six and consummated her marriage to him aged nine, according to most — although not all — Islamic religious writings.

The European court agreed with judgement of the Austrian courts that Muslims would find the woman’s statements “wrong and offensive, even if Muhammad had married a six-year-old and had intercourse with her when she had been nine”, and ruled that they “carefully balanced her right to freedom of expression with the rights of others to have their religious feelings protected, and to have religious peace preserved in Austrian society.”

E.S. had argued that the courts had violated her right to freedom of expression under Article 10 of the European Convention on Human Rights.

Article 10 suggests that “Everyone has the right to freedom of expression,” and that this right “shall include freedom to hold opinions and to receive and impart information and ideas without interference by public authority and regardless of frontiers.”

Proponents of the Convention often fail to note, however, that a sub-section of Article 10 goes on to heavily qualify that right, authorising states to impose “conditions, restrictions or penalties” which is deems necessary for the purposes of  “national security, territorial integrity or public safety, for the prevention of disorder or crime, for the protection of health or morals, for the protection of the reputation or rights of others, for preventing the disclosure of information received in confidence, or for maintaining the authority and impartiality of the judiciary.”

In this way, it is quite unlike the First Amendment to the U.S. Constitution, with critics suggesting that the European Convention is actually something of a Trojan Horse, allowing governments broad discretion to restrict free speech when it is used in a contentious way.

UKIP leader Gerard Batten, who has made a point of publicly criticising Islam since taking over from Nigel Farage’s short-lived successor, Henry Bolton, told Breitbart London that the European Court of Human Rights was introducing  “a blasphemy law by the back door”.

“In the UK, the famous Oz magazine trial of 1971 had the great and good turning out in court to argue against the blasphemy laws, which were subsequently repealed. Since then it has been OK to say whatever you like about Jesus, but forty-seven years on, Mohammed is a different matter,” he observed.

“The Austrian legal system has decided to make another submission to Islam, and the ECHR has followed suit.”

The European Court of Human Rights is technically not a European Union institution, but signing up to it is a requirement for would-be member-states, and Labour’s Charles Falconer suggested that “for all intents and purposes” it is “not possible” to be an EU member-state without submitting to the ECHR.