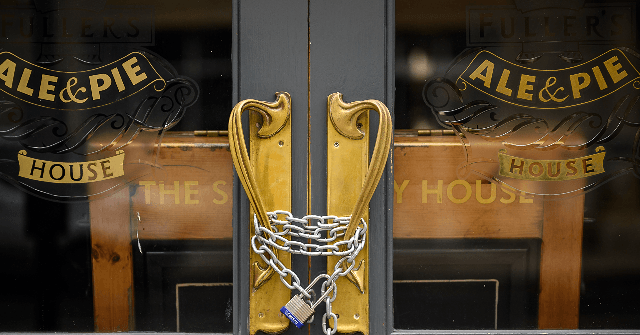 The British government continues its dizzying vacillation on the long-discussed vaccine passport programme, and is expected to announce Monday that Britons will not now need government papers to enjoy their right to a drink inside a pub.

Pub beer gardens are due to re-open on April 12th, and drinking indoors could return by May 17th. At the same time, other businesses like ‘non-essential’ retail premises, hairdressers, and sports facilities are due to reopen, too.

But the government has been engaged in a near-six month internal struggle over whether Britons will be forced into an authoritarian-style ‘papers, please’ culture when these places reopen, with government documents proving individuals’ coronavirus status required to gain access to public places.

After a series of u-turns between positions, the government is expected to announce Monday that those visiting pubs and restaurants will not need a vaccine passport to get through the door, The Sunday Times claims. This, the paper says, is a forfeit to a growing number of rebel MPs across the house who have expressed alarm over the government expecting citizens to give up rights and to live under a regime of medical certification.

Pubs and restaurants, therefore, will join a list of other venues which will be vaccine-paper free including doctors’ offices, hospitals, supermarkets, courts, and police stations. Sports stadiums, nightclubs, and potentially even Friday-night-crowded pubs may still need Corona passports.

The claim follows another concession to anti-paperwork rebels in Parliament. It was reported Saturday that the government was considering building a statutory time limit into legislation surrounding Covid passports to appease the 73 members of the house said to vote against Boris Johnson’s plans.

Delingpole: The Gestapo Would Have Loved BoJo’s ‘Papers for a Pint’ Rule https://t.co/aBwRLxGGxu

An unnamed ‘Whitehall source’ was reported to have said: It will be time-limited and I think the duration of the scheme will be measured in months… The party will not wear any longer.”

It is perhaps well that the government will allow Britons to socialise without interrogation and paperwork — a separate report in British newspaper The Daily Telegraph claims the QR-code-based mobile phone app being developed by the government to make Coronavirus passports possible is months away from being ready to use. Indeed, the report claims it may not be rolled out until the Autumn.

While the government has never officially confirmed that such an app is actually being developed until now, it has been revealed several times that government contracts to software development companies to produce vaccine passport programmes have been awarded.

These developments come against months of u-turns and vacillations at the heart of government over vaccine passports. Top Boris Johnson ally Michael Gove was completely clear when he gave a flat “no” answer to a journalist’s question of whether Britons would ever need to show paperwork to enter a pub. Yet months later, Gove was put in charge of the government project to deliver exactly that.

Following weeks of criticism, including from Brexit’s Nigel Farage who called the attack on the hospitality industry after a year of punishment “outrageous”, the government now appears to be creeping back to its original position.