An elected student leader has demanded a mural commemorating students who died fighting in the First World War be destroyed, berating the fact those depicted are “white men”.

Emily Dawes, the president of the University of Southampton Student Union, vowed to vandalise the memorial unless it was taken down.

Update 1400 — “I had no intention of the tweet being taken literally”
Following her messages calling for the removal or destruction of the mural and the university seeking to distance itself from the student union officer, Dawes has deleted her Tweet and published an apology, claiming she did not mean for it to be taken literally…

The mural, displayed at the heart of the leading university’s campus, depicts fallen soldiers — who were students before they left to fight in the Great War — picking up the degrees they did to live to finish.

“Mark my words — we’re taking down the mural of white men in the uni Senate room, even if I have to paint over it myself,” Ms Dawes said on Twitter on Wednesday.

Minutes before, from an “All Things Black” debate, she had tweeted a picture of the mural, captioned: “ONE OF THE WOMEN JUST SAID ‘it’s nearly armistice day so are we covering up this tapestry??’ AND HOLY SHIT. FUCK YES. GRL PWR.”

Later on Wednesday night, she added: “As white people, we are so so ignorant and closed minded without even realising it. Listen to your black friends/colleagues/students and ask how you can be the ally they want!!!!!!” 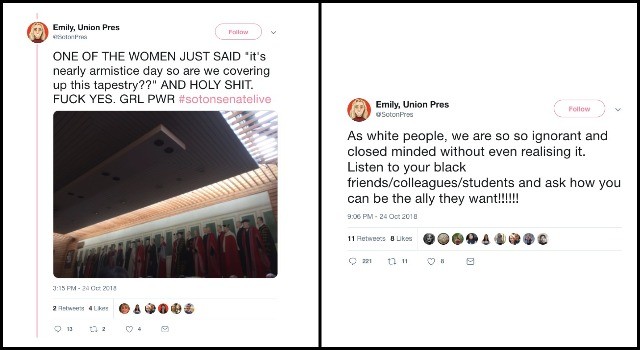 The Rothenstein Mural was unveiled in the University’s Senate Room in 2014 and was “painted in 1916 as a memorial to members of the British universities serving in the Great War”, according to the institution’s website.

‏It was painted by Sir William Rothenstein, former Principal of the Royal College of Art, and presented to the University of Southampton in 1959 by the artist’s son, Sir John Rothenstein.

Many users of Twitter reacted angrily to Ms Dawes’ statements. Anthea Bailey replied to her tweets: “This girl represents everything that is wrong with the left wingers taking over our Uni’s.”

Campaigner and journalist Martin Daubney blasted: “So many men died in WWI we don’t know the true number. Some say 20 million deaths, and most of them were white men.

“They died so we stayed free. And this is how Emily thinks we should repay that sacrifice. This is too much now. This madness needs to end.”

Presenter and writer Andy West urged the university not to “cave in to this sad, cynical, fanatical insanity”.

He added: “What has made people like [the Student Union President] become so horribly warped and bigoted? These people don’t want equality, they want revenge, attention and hate. It’s genuinely troubling.”

The university was quick to distance itself from the views of the Student Union president, writing in a statement on social media:

“The comments made by the Students’ Union President regarding the Rothenstein Mural are not shared by us and do not represent the views of the University community. We are proud to display the Mural, which is a memorial to all members of British universities who served in WW1.”

Breitbart London contacted the Student Union to ask if the organisation supported Ms Dawes’ statement but they had not replied at the time of publication.