North Yorkshire Police has pulled an ad campaign that warned children not to become sexually exploited after accusations of ‘victim-blaming.’

The Facebook and Twitter posts, which have since been taken down, were aimed at children with one reading: “Don’t become a victim of Child Sexual Exploitation. Criminals will use and abuse you and it will affect the rest of your life.

“Make the right choice. Stay safe and speak to the police.” 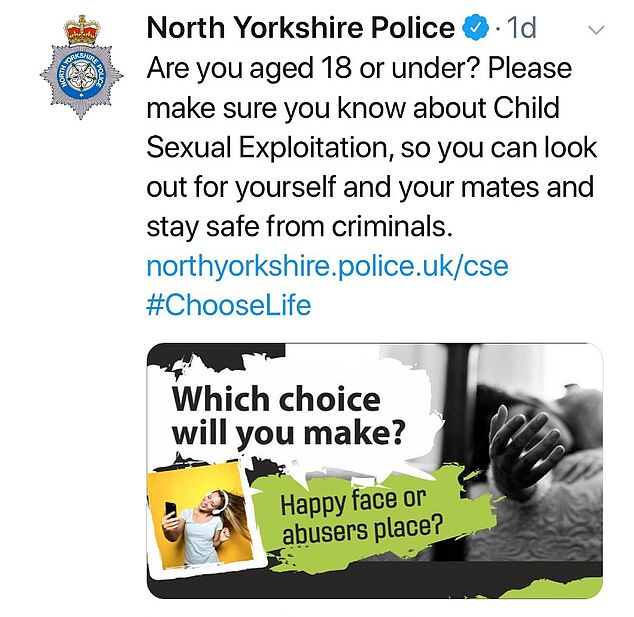 Another was captioned in a way that implied being abused was a “choice,” with: “Which choice will you make? Birthday gifts or angry fists?

“Which choice will you make? Happy face or abusers place?”

In the past, other UK police forces have appeared to put the onus on children to protect themselves from abuse after an ad campaign by a number of forces advised children before the summer vacations to beware of holidays that ‘aren’t what they seem,’ lest they be sent abroad to be subjected to female genital mutilation (FGM) or a forced marriage.

Deleting them is a good start, but now we need you to explain, and apologise please.

Most of all, completely shift your thinking on this issue.

A spokesman for North Yorkshire Police said that the “hard-hitting” ads were not meant to blame victims, telling The Telegraph:

“For this campaign, we were drawing on the experience of officers on the ground, that vulnerable people who are at a crossroads in their lives don’t feel that they have any power. No person should feel they have no way out of victimisation.

“This deliberately hard-hitting campaign was to get across the message that exploitation is not a life that anyone has to live, and that the police are there to support people who are at risk.

“No victim of child sexual exploitation is to blame and that is not the message we set out to give in our campaign.

“It’s important to us that we listen to the public — and especially the young people we’re trying to reach — so we’ve withdrawn the campaign on social media so we can do some more testing with our target audience.”

Survivors of grooming gangs across the country, including Oxford, Telford, and Newcastle, reported that social services and police blamed them for their own abuse.

The crime commissioner for South Yorkshire Police admitted in 2015 that police treated girls who had been raped in Rotherham as ‘child prostitutes’ rather than victims — similar to how one whistleblower described victims being treated by police in Rochdale.

Rotherham has become synonymous with mass child sexual exploitation, after the 2014 Jay review found that at least 1,400 — later revised up to more than 1,500 — mostly white girls had been groomed and raped by Pakistani-Muslim heritage men and that a culture of political correctness and victim blaming by South Yorkshire Police and social services resulted in the widespread abuse going on for decades.

A similar pattern of gang rapes of Sikh girls by Muslim men was reported this week, again police reluctant to act on complaints of decades of abuse due to political correctness.

Rape gang survivor Sammy Woodhouse revealed Tuesday that Rotherham council officials have invited her abuser Arshid Hussain access to her son, whom he fathered when he raped her when she was just 14.