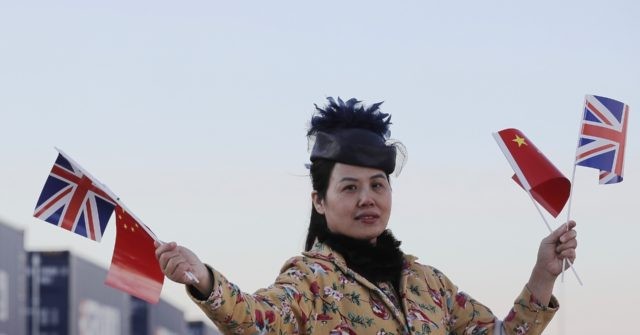 The British government sent up to £320 million to Chinese companies with links to the ruling communist party (CCP) during the rush to acquire ventilators and protective gear for healthcare workers in the initial outbreak of the China virus pandemic.

One of the Chinese companies which raked in millions of British taxpayer money was China Meheco — a subsidiary of the state-owned China General Technology Group — which signed four deals with the UK totalling £18 million in exchange for PPE and ventilators, according to The Telegraph. One of China General Technology Group’s other subsidiaries supplies the Chinese military with weapons and equipment.

Other companies that profited from the UK’s response to the Wuhan virus were state-backed exporter Beijing Union Glory Investment, which was given over £100 million in UK contracts, and state-run Sinopharm, a Chinese pharmaceutical firm, which was granted £31 million in April and May.

In response to the hundreds of millions sent to companies with links to the CCP, the Conservative Party chairman of the Foreign Affairs select committee, Tom Tugendhat, said: “We need to reduce dependence on companies controlled by states that seek to use that leverage to influence our actions and those of our allies.

“That means building up partnerships with others and reducing our reliance on China’s state-owned businesses.”

Hong Kong Watch founder and advisor to the Inter-Parliamentary Alliance on China Benedict Rogers said: “This illustrates the absolutely urgent need to reduce our strategic dependency on China in certain critical sectors such as PPE, and diversify our supply chains more generally.”

“It is outrageous that the regime that gave us the pandemic, through its mendacity, irresponsibility, failure to alert the world in a timely manner, and its repression of the truth — by silencing whistleblowers — instead of repressing the virus at the very beginning, is now profiting from it,” the Hong Kong Watch founder added.

“We must learn to produce these vital products ourselves and in other markets so that we do not have to give this brutal regime, committing egregious human rights violations, hundreds of millions of pounds worth of business of this kind,” Rogers concluded.

Firms in the British Healthcare Trades Association claimed that the government had ignored repeated offers to supply medical equipment, forcing them to send the material to hospitals in EU nations such as Italy, Spain, and Germany.

In April, Leeds West MP Rachel Reeves reported that she had received messages from “lots of manufacturers” who claimed to have contacted the government with offers to help during the widespread shortages in the National Health Service (NHS), yet they heard “nothing back”.

Responding to the latest revelations, a government spokesman said: “Proper due diligence is carried out for all government contracts, and we take these checks extremely seriously – all suppliers must follow the highest legal and ethical standards.

“We have been working tirelessly to deliver PPE and medical equipment to protect our health and social care staff on the frontline and treat patients, and the rapid action we took to increase the number of ventilators in the UK meant every patient requiring a ventilator has had access to one.”

The contracts came at a time when Prime Minister Boris Johnson’s government came under increasing pressure to decrease ties with the communist regime, over human rights violations in Xinjiang and the oppressive crackdown on pro-democracy protests in Hong Kong, a former British colony.

At the same time, China was accused of conducting ‘mask diplomacy’ by shipping millions of pieces of PPE and ventilators to countries across Europe, with many shipments being marred by failures and deficiencies.

In March, the government of the Netherlands was forced to recall 600,000 medical masks from China, which were found to have faulty filters.

Spain was also forced to discard thousands of coronavirus test kits from China, which were revealed to only have a 30 per cent accuracy rate in detecting the virus.

The Chinese Communist Party denied the allegations of faulty equipment, and even went on to brag about China’s “roaring” economy as a result of the demand for medical equipment.