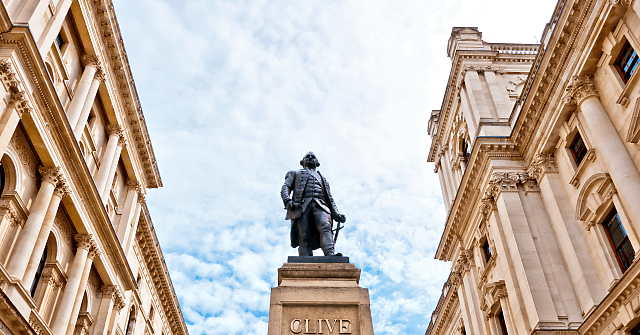 The British government’s Foreign and Commonwealth Office has suggested the iconic statue of Clive of India near its headquarters “may have to go”.

Robert Clive, later Baron Clive of Plassey, was long regarded as one of Britain’s greatest military leaders — despite having no formal military training — and was credited in large part for winning Britain its Indian empire in the 1700s.

For the modern-day social justice left, however, Clive is not a great man of history but a colonialist criminal, with his statue on King Charles Street one of many targeted for destruction in the wake of the Black Lives Matter unrest in the U.S. crossing the Atlantic.

The supposedly right-leaning Mail on Sunday, describing Clive as a “profiteer” and a “divisive imperialist”, reports that senior bureaucrats at Boris Johnson’s Foreign and Commonwealth Office, led by the First Secretary of State, Dominic Raab, may be set to give in to the mob, with top official Sir Simon McDonald saying it “may have to go” while on a Zoom call.

Clive’s statue in Shrewsbury, when he was the Member of Parliament for many years, also faces the axe.

Neither the getting nor the governance of empires was controversial in Clive’s day, with contemporary states such as France, Spain, and Ottoman Turkey all pursuing imperial ambitions — indeed, India itself was under the sway of the Mughal dynasty, descended of Muslim invaders from present-day Uzbekistan who could trace their lineage to Tamerlane and Genghis Khan.

Moreover, Clive’s conquest of Bengal with a small, vastly outnumbered force — or at least, his displacement of Bengal’s reigning Nawab with another native strongman more will to subordinate himself to British interests — followed the Nawab attacking the East India Company’s lawfully-established trading post of Calcutta and murdering dozens of British prisoners in a stifling prison cell remembered by history as the Black Hole.

In Britain the East India Company was criticised for its exploitative practices even in Clive’s lifetime, although he did try to implement anti-corruption reforms with limited success himself — and was vindicated by a House of Commons resolution in his favour after a parliamentary inquiry into the Company’s activities.

A Foreign and Commonwealth Office spokesman has tried to distance itself from Sir Simon’s comments somewhat since they leaked, suggesting it has “no plans” to remove Clive’s statue — but in the same breath shifting responsibility for such a decision to Historic England.

This is far from a commitment to keep the statue in place, of course, and the delegation to Historic England is all the more concerning considering that body’s patchy record on actually protecting England’s history.

“The FCO is examining the statues and artwork within the department with a view to ensure it is more representative of the UK today, while preserving history,” the spokesman added, in an apparent bid to appease those who do want to see British monuments, public portraiture, and so on radically overhauled to reflect the sensibilities of 21st-century left-liberals.

Most of the councils responsible for local government across Britain have already announced they will be reviewing their public monuments, and Mayor Sadiq Khan of London has established a Commission for Diversity in the Public Realm to replace existing memorials with new ones celebrating ethnic minorities and LGBTQ+ individuals.