Emergency field hospitals established across the country by the British government at a cost of hundreds of millions of pounds are being stood down and decommissioned, in many cases without having treated a single patient for coronavirus.

12 so-called ‘Nightingale’ hospitals — named for a famed 19th-century British nurse who revolutionised healthcare practices — were established across the United Kingdom in 2020, part of a plan to see the nation prepared for a sudden surge in critical coronavirus cases. Built inside sports stadia, convention centers, and former retail premises, the sites provided thousands of extra beds.

Now more of the Nightingale hospitals are being shut down without having seen a single patient. The 500-bed Yorkshire Nightingale has now been stood down, the BBC reports, and like some others, it has not treated a single Coronavirus patient since it was opened in April 2020. 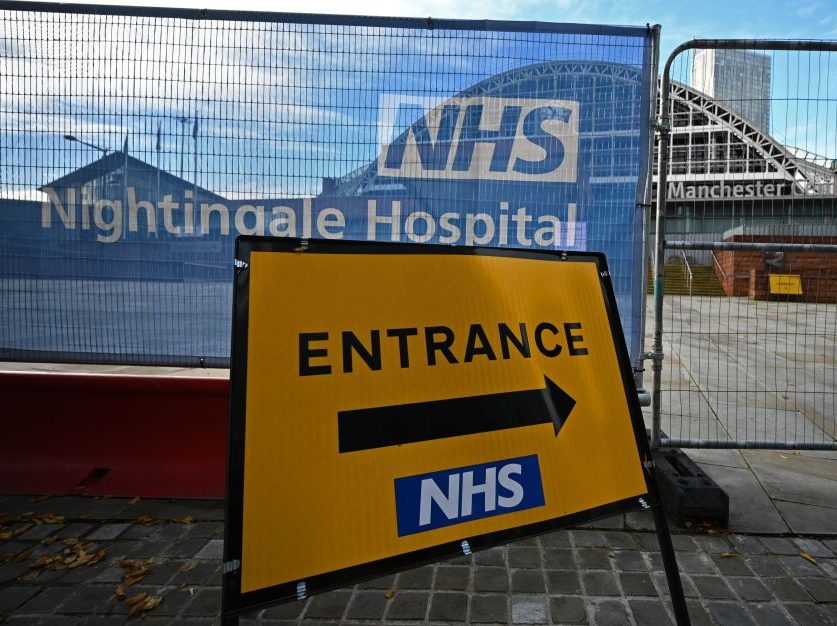 Signage is seen outside the NHS Nightingale Hospital North West set up to provide more hospital capacity during the novel coronavirus pandemic at Manchester Central Convention Complex in Manchester, northwest England on October 13, 2020. (Photo by OLI SCARFF/AFP via Getty Images)

It has not been totally empty, however, and the enormous facility — built inside the Harrogate Convention Centre — has seen some Radiology outpatients for scans in recent months.

The BBC reports the now mothballed facility cost the government £27 million ($37,000,000) to establish, but this already steep sum is only part of the picture. The UK’s Health Service Journal reported in January that beyond the headline construction figures, other costs associated with the largely unused temporary hospitals pushed the true figure upwards.

In all, the journal said, the hospitals would cost the taxpayer over half a billion pounds (£532,000,000, or $735,000,000) by the end of 2022. The HSJ noted that the “estimate includes costs for setting up the Nightingales, running costs, stand-by costs and decommissioning costs.”

There is a cost to the local authority, as well. Harrogate council, which owns the convention centre and lent it rent-free to the NHS for the emergency, now has a £9 million ($12,000,000) budget black hole from lost income incurred due to their property being effectively empty for a year.

London’s NHS Field Hospital to Be Closed After Barely Being Used https://t.co/EKXVjIpHbD

Despite the cost, it has been claimed the hospital wouldn’t even have functioned had it been needed, as allegedly there aren’t enough trained doctors and nurses in the country to attend to the thousands of extra beds in coronavirus facilities, were they filled. City AM reported the remarks of British Association of Critical Care Nurses boss Nicki Credland who claimed the London Nightingale alone would, if it were activated, need more Intensive Care nurses to run it than presently work in the whole United Kingdom.

These claims and others are now being probed by the Yorkshire regional goverment in its inquiry into the area’s ghost hospital.

The NHS has defended the empty field hospitals, calling them “the ultimate insurance policy” that by being empty were a sign that things were going to plan. The NHS had said the hospitals were established to see off scenes like those witnessed in Italy at the start of Coronavirus, with facilities at the point of collapse due to demand.

Coronavirus: Fewer Than Two Per Cent of NHS Hospital Trusts Busier Now Than in 2019 https://t.co/PGK3cqXv6p