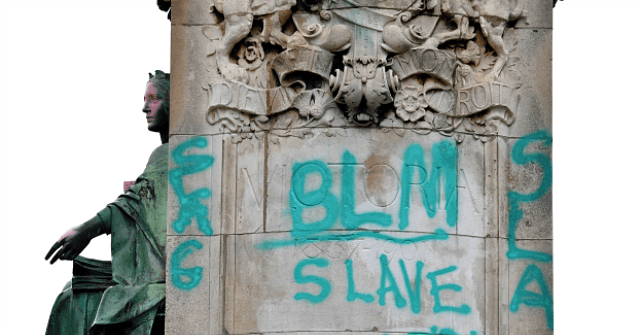 An official review of statues in Leeds, England, concluded that they “over-celebrated Empire, Christianity and ‘great’ white men” and should be changed through the use of new public-facing plaques putting them a different context.

Leeds was the site of one of the more dramatic statue vandalisations in Britain as Black Lives Matter unrest swept the country, with an impressive monument to Queen Victoria being defaced with the BLM slogans and pejoratives including ‘racist’, ‘whore’, ‘slag’, and ‘slave owner’ — wholly inaccurately, as the British had abolished the slave trade decades prior to her coronation and spent much of her reign stamping it out globally, at great cost.

The local government responded by announcing a review targeting such British icons as the Duke of Wellington, hero of Waterloo, Sir Robert Peel, founder of the police, and the Black Prince, a medieval royal with no connection to the slave trade or colonialism.

That review, led by Labour politician Alison Lowe, had to conclude that Leeds did not commemorate any major players in the former slave trade, according to the Yorkshire Evening Post, but nevertheless found a way to taint them as what the newspaper called “beneficiaries of hereditary wealth and colonialism”.

None will be removed, however, as a public consultation found just 10 per cent of people wanted any change.

“I was surprised there were so few people wanted any change…  only 10 per cent wanted some active change. I know thousands did not [respond] but we had to take it that they were happy with the status quo,” Lowe told the YEP, perhaps more perturbed than she appeared to let on.

“There was a perception that lots of black people would write in and say ‘get rid of statue X or Y’. That was as a result of the Edward Colston toppling in Bristol which was as a result of George Floyd and Black Lives Matter. There was a belief, no facts, that lots of black people were angry about statues but I had lots of conversations with Black Lives Matters groups and actually people were not really that interested,” she revealed.

It is somewhat surprising, therefore, that the review will recommend the statues are changed with new plaques putting them in a modern context regardless.

“For black people, we live in a world where white voices and white faces and white names predominate. We don’t like it,” Lowe insisted.

“[B]ut there is too much for us to spend our lives looking back saying why is that like that. What happened is, people were much more interested in looking forward… What is important is that we don’t allow stories of the past to stay stories that are untested and unchallenged. We recognise the contribution of immigrants and migrants. Leeds is built on the back of lots of people who don’t get a say in power and are not acknowledged,” she claimed.

“Hopefully through this report black people’s contributions will be more widely acknowledged, recognised and validated.”

“It was only a matter of years ago that the West observed ISIS’ destruction of many of the historic monuments of the Middle East in horror and condemnation,” recalled Ben Harris-Quinney, chairman of Britain’s oldest conservative think tank, the Bow Group, in comments to Breitbart London.

“Today we are happily engaged in the destruction of our own history,” Harris-Quinney lamented.

“The fundamental misunderstanding made in this process comes from the very recent conception that history and its figures are unacceptable if they don’t conform to the social mores of the current year. It is a tragic misunderstanding of what history is.

“Many monuments like statues are not just historic because of the people they portray, but are part of history themselves, reflecting the desire of the people of the time to memorialise movements and individuals of significance,” he explained.

“It comes as no surprise, therefore, that when given the courtesy of being asked, the vast majority of the British public do not want monuments to be torn down or even altered slightly. It is a tiny minority of metropolitan liberals who want to project their bizarre and destructive world view on the rest of us,” Harris-Quinney continued.

“Whether it is via the government, National Trust, or local council, the British public do not want their history removed, or even plaques placed to patronisingly describe how terrible it was. It is one of the very few things that once destroyed no amount of money can replace. History should simply be preserved, and all should be free to draw their own conclusions about the merits of its ideas and protagonists.”