The CST recorded record levels of antisemitism in Britain last year- with a 34 percent increase in Jew-hate from 2020 – with 2021 marking the highest number of antisemitic incidents in the U.K. recorded by the CST since they began recording antisemitic in 1984 – the era of skinheads and the far-right National Front.

Many of the Jew-hate incidents have been attributed by the CST to the heightened focus on the Israel-Palestine conflict, particularly after the Israeli security forces dispersed rioters at the Al-Aqsa mosque in May 2021, which international agitators claimed was an attack on Islamic worshippers.

May 2021 indicated a surge in antisemitism with 25 incidents containing discourse relating to Islam and Muslims occurring occurred in the month alone. This was also the month where Islamic radicals waving Palestinian flags on cars drove through predominantly Jewish areas of London, and individuals shouted “F*ck the Jews” and “rape their daughters”.

There were 120 recorded calls for the destruction of the Jewish State of Israel and 62 incidents comparing Israel and Nazi Germany – with many incidents also containing anti-Jewish comments. 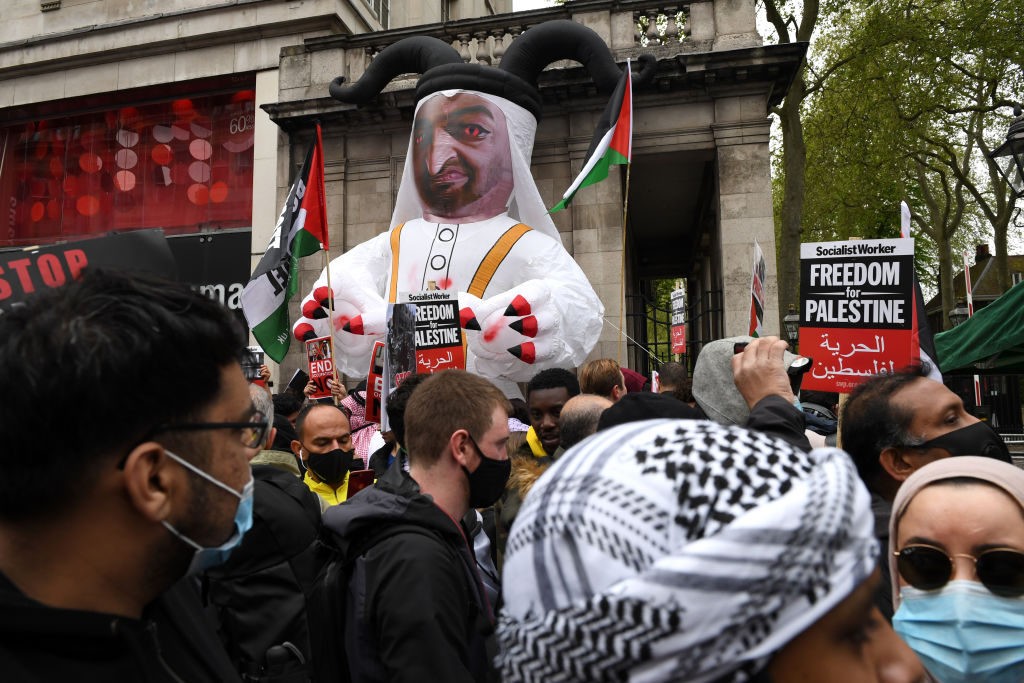 Protesters attend a rally to express solidarity with Palestine on May 15, 2021 in London, in front of a Jewish effigy. (Chris J Ratcliffe/Getty Images)

Throughout 2021 there were 502 antisemitic incidents that used “far-right or Nazi-related discourse”, including 90 instances where the Holocaust was either celebrated or individuals “expressed a wish for it to happen again”.

The past 12 months also marked the most violent year towards Jewish individuals with there being multiple violent antisemitic attacks against Jewish people with CST saying the 176 incidents were “the most ever recorded in any year”.

During December 2021 a group of men attacked a bus full of Jewish teenagers celebrating Hannukah with the attackers spitting, shouting, and even striking with removed shoes – a sign of immense disrespect in some cultures – their bus and forcing them to flee the area.

Antisemitic attacks in Britain were not left in 2021, with two Jewish shop owners “viciously” attacked outside their shop in North London on the 26th of January by a masked attacker.