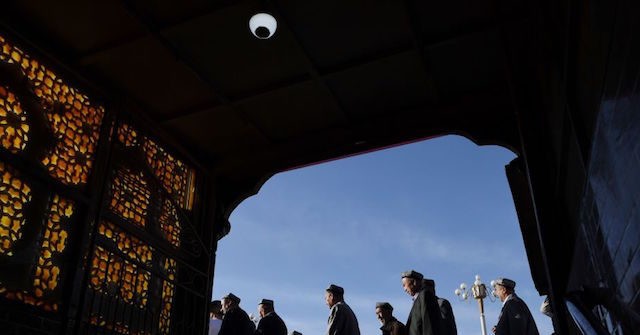 The World Uyghur Congress, an organization advocating for the human rights of China’s Uighur ethnic minority, lamented that the situation for their people has “deteriorated incredibly” in a statement observing the ten-year anniversary of the massacre of Uighur protesters in Urumqi, Xinjiang, in 2009.

Xinjiang is China’s westernmost and largest province, and home to most of the nation’s ethnic Uighur minority. The Uighurs are a Turkic people who speak a Turkic language, largely practice Islam, and have a distinct culture from the majority Han Chinese. Under current Communist Party leader Xi Jinping, Beijing has launched a campaign to destroy Uighur identity, most prominently displayed in the establishment of concentration camps in which survivors say Communist Party members torture, indoctrinate, and kill them. Uighurs – and others of majority Muslim ethnic minorities, mostly Kazakhs and Kyrgyz people – who have escaped the camps say they are forced to learn Mandarin and abandon their Uighur language, eat pork as a sign that they no longer practice Islam, and memorize songs worshipping Xi Jinping and praising the Communist Party.

The modern Chinese crackdown in Xinjiang in many ways began in earnest on July 5, 2009, in response to a massive uprising against Han government officials in Urumqi, the capital of Xinjiang.

“On July 5-7, 2009, thousands of Uyghur protesters were killed, forcibly disappeared or injured in a brutal response from the Chinese government to peaceful protests from mostly Uyghur students in Urumqi in response to China’s policies in the region,” the World Uyghur Congress narrated in its statement observing the anniversary. “The massacre proved to be a major turning point direction in the strategy of the Chinese government towards East Turkistan [Xinjiang] to one of outright violence and oppression and a complete lack of tolerance or willingness to listen to the voices and concerns of the Uyghur people.”

“In the 10 years since the massacre, the situation of the Uyghur people in East Turkistan has deteriorated incredibly, as over 1 million innocent Uyghurs have been detained in internment camps and the Chinese government is striving to completely erode the Uyghur identity,” the statement continues.

According to reports at the time, the clashes in Urumqi began as a response to reports that two Uighur workers in Guangdong had been killed by Han Chinese, though the protest rapidly became about the general abuses that Uighurs suffered in the hands of the Han-controlled government. The Chinese government claimed that 140 people died in the crackdown against the protests, insisting that they were “riots” organized by then-World Uyghur Congress leader and former political prisoner Rebiya Kadeer, claims the group has consistently denied. Amnesty International at the time blamed the Communist Party for “provoking racial hatred between Han Chinese and Uighur[s]” and dismissed the claims against Kadeer as lies.

The death toll, including the number of “disappeared” Uighurs, may be significantly greater than that admitted to by Beijing. According to the IHH Humanitarian Relief Foundation, a Turkish NGO, at least 500 people died in the Urumqi clashes and another 1,000 injured, mostly Uighurs.

“At least 4,000 people were arrested in operations conducted by Chinese police, paramilitary police and army in Urumqi, Kashgar and Hoten over charges of involvement in murder, plundering, attacks and arson during the protests,” IHH adds.

This week, the World Uyghur Congress further detailed that, in response to peaceful Uighur protesters, “hundreds of Chinese police with shields, rifles, and clubs were already in position and moved to disperse and arrest the protesters before they reached the People’s Square, indicating that the government had full knowledge of the protest beforehand and was well prepared to suppress it.”

The international community did not sanction China in any material way for the Urumqi killings. Some months after the killings, Turkish President Recep Tayyip Erdogan accused the Communist Party of “genocide” against the Uighurs, but the Turkish government did not act against China. Turkey often makes statements nominally supporting the Uighurs in observance of their shared ethnic background.

“The event taking place in China is a kind of genocide,” Erdogan said at the time. “We have difficulty understanding how China’s leadership… can remain a spectator in the face of these events.”

This week, the same Erdogan praised China for its treatment of the Uighur minority, up to 3 million members of which are believed to be currently languishing in labor camps.

“It is a fact that the residents of various ethnic groups in Northwest China’s Xinjiang Uyghur Autonomous Region are living happily under China’s development and prosperity,” Erdogan was quoted in Chinese media as saying during a visit to Beijing this week. “Turkey does not allow anyone to provoke the relationship between the two countries [Turkey and China].”

“The Chinese government was never held fully accountable by the international community for this terrible atrocity in 2009. The failure to act emboldened the Chinese government to pursue even more repressive measures, now resulting in the internment of millions of innocent people in camps,” Dolkun Isa, the current head of the World Uyghur Congress, said in observance of the tenth anniversary of the Urumqi killings on Wednesday. “The international community must learn from this and finally hold China accountable for its crimes against humanity.”

The Uighur advocacy group has scheduled worldwide protests for Friday.

The Chinese government considers Dolkun Isa a terrorist for his advocacy. The Communist Party attempted to strongarm Interpol into issuing a “red alert,” which urge member nations to arrest a targeted individual, for Isa. The organization initially accepted the request, but canceled the red alert in February 2018, finding no evidence Isa was a threat. In October of that year, the president of Interpol disappeared while on a trip to China, resurfacing in May of this year allegedly having “confessed” under Chinese custody to taking bribes.

Interpol has not intervened or condemned China for the disappearance, nor has the international community lobbied for Meng Hongwei’s rights. His wife, Grace Meng, has consistently denied the charges against him.

In Xinjiang, the number of people in concentration camps appears to grow steadily, as does evidence that they are suffering human rights abuses. The U.S. government found evidence that the number of people trapped in the camps tripled between 2018 and 2019. An independent tribunal in London published a report in June concluding that ample evidence suggests the Communist Party is preparing Uighurs for live organ harvesting, a lucrative and gory trade that had previously mostly been limited to use against Falun Gong practitioners, which Beijing considers a dangerous cult.

The Chinese regime calls the camps “vocational centers” necessary to teach the uneducated Uighurs job skills to survive in the Chinese economy and credits them with “promot[ing] interfaith harmony.”