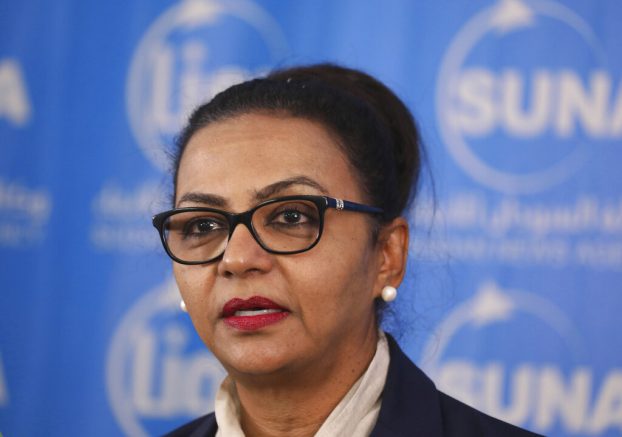 Sudanese Finance Minister Heba Mohamed Ali speaks during a press conference in Khartoum, Sudan, Tuesday Oct. 20, 2020. President Donald Trump on Monday said Sudan will be removed from the U.S. list of state sponsors of terrorism if it follows through on its pledge to pay $335 million to American terror victims and their families.  (AP Photo/Marwan Ali)

The U.S. is expected to remove Sudan from the state sponsors of terrorism list. On Monday, President Trump announced the move after the East African country agreed to pay $335 million in settlements for American terror victims and their families.

Sudanese Prime Minister Abdalla Hamdok quickly thanked the President and said he looks forward to a transition into democracy for his people.

“Last year, we started a serious discussion with the American administration to remove Sudan’s name from the list of countries sponsoring terrorism,”Hamdok explained. “I spent the whole of last year in constant contact with you (the Sudanese people), telling you that we have come close to this moment, the moment of removing Sudan’s name from that list, and today this was achieved.”

Sudan has been on the list since 1993 When its former leader was believed to have supported militia groups. After two years of formal negotiations, the new government has been cooperating with the US. on counter-terrorism efforts.

“Concerning the issue of the terror list, the Kingdom of Saudi Arabia has been working with Sudan for years to bridge gaps between the United States and Sudan, and we managed to contribute to this process,” stated Adel al-Jubeir, Saudi State Minister for Foreign Affairs. “We worked and we continue to work with Sudan in order to remove Sudan from sponsors of terrorism list and we believe it is a matter of time.”

The deal could also pave the way for Sudan to establish diplomatic relations with Israel. However, officials have made it clear that the normalization between the two countries should remain separate from the de-listing of the African country.

As of recent, Hamdok had opposed to doing so as Sudan’s transitional government remains divided on formalizing diplomacy with Israel. A U.S. official explained Israel and Sudan could later work to establish relations, but only after the U.S. confirms its list removal.

The move would add to the string of foreign policy achievements that have been brokered by President Trump with the most recent being the normalization of Israel’s relations with the UAE and Bahrain.

RELATED: US May Delist Sudan As State Sponsor Of Terror