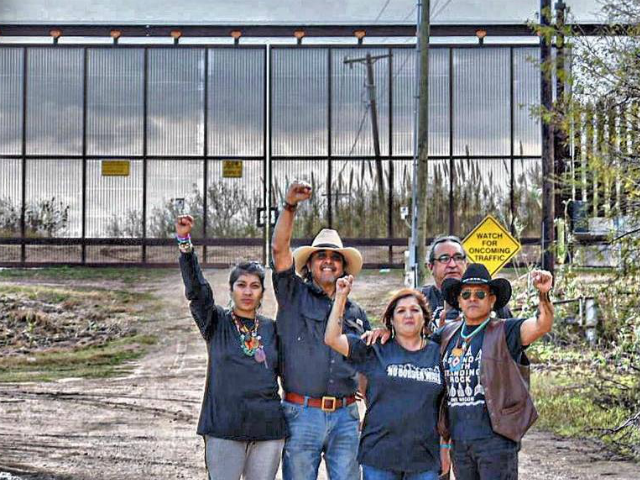 Various activist groups are protesting the building of a proposed border wall-fence along the banks of the Rio Grande. The barrier is expected to cut through various wildlife refuges like a butterfly center.

This month, U.S. Customs and Border Protection announced it would begin construction of a wall-fence system running six miles along the border. The system would include a concrete wall that would stand up to an existing river levee and an 18-foot bollard fence on top. The project also calls for the removal of 150 feet of brush in what is considered an enforcement zone. The government would also include detection technology, lighting, an all-weather parallel road, and video surveillance. According to CBP, $145 million has already been awarded for the project.

The wall-fence system is expected to cut through the National Butterfly Center and others. The leaders of the center are fierce opponents to the plan.

In addition to the butterfly center, a group calling themselves the Carrizo Comecrudo Nation of Texas is already holding protests and camping in the area to galvanize opposition to construction. While the members of the Carrizo Commecrudo are claiming the banks of the Rio Grande as their ancestral lands, a search of the U.S. Bureau of Indian Affairs and the National Conference of State Legislatures revealed they are not a federally or state recognized for funding or protection purposes.

Activists are camping out at some of the areas where the wall is expected to be built. One of the campsites bearing the name Somi Se’k Village apparently run by the Carrizo Comecrudo has opened the call to other activists for assistance:

The Somi Se’k Village Base Camp will support and train activists to populate these villages. We operate with the understanding that the issues arising around the border– the right to migrate, destruction of the environment and indigenous sacred sites, and the inhumane incarceration of migrant children– are intersectional and are symptoms of centuries-long control and oppression by colonizers.