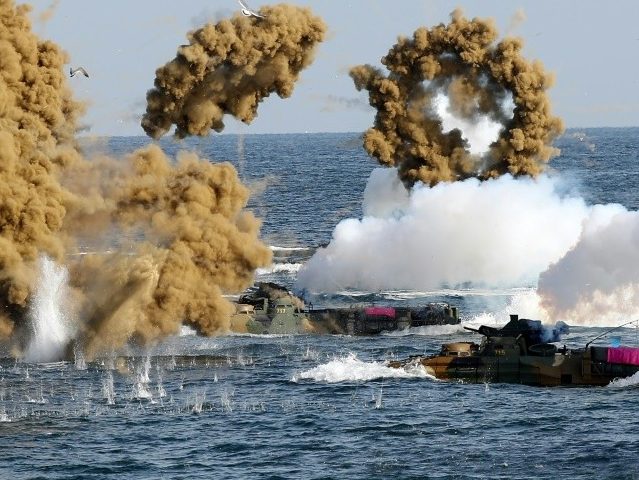 The United States and South Korea are expected to restart small-scale military exercises on Monday, a few days ahead of a meeting this week between U.S. Secretary of State Mike Pompeo and North Korea’s second-in-command to discuss denuclearization.

As he announced on Sunday that the Trump administration is resuming talks with North Korea, Pompeo noted that he is also supposed to discuss the scheduling of a second denuclearization summit between U.S. President Donald Trump and North Korean dictator Kim Jong-un when he meets Pyongyang’s second-in-command Kim Yong-chol in New York City at the end of the week.

“I expect we’ll make some real progress, including an effort to make sure that the summit between our two leaders can take place, where we can make substantial steps towards denuclearization,” Pompeo told CBS’s Face the Nation.

A spokesman for South Korea’s Ministry of Defense confirmed a round of training would begin near the southern city of Pohang, with no media access expected.

About 500 American and South Korean marines will participate in the maneuvers, the Yonhap news agency reported.

On Friday, the rogue North Korean regime reportedly warned that it would “seriously” consider resuming development of its nuclear program if the Trump administration does not lift its campaign of “maximum pressure” and sanctions.

The improvement of relations and sanctions are incompatible. The U.S. thinks that its oft-repeated ‘sanctions and pressure’ lead to ‘denuclearization.’ We cannot help laughing at such a foolish idea…As shown, the U.S. is totally to blame for all the problems on the Korean peninsula including the nuclear issue and therefore, the very one that caused all those must untie the knot it made.

In an interview on Fox News Sunday, Pompeo dismissed North Korea’s threat that it may resume its development of nuclear weapons.

“I’m not worried about that,” the top U.S. diplomat proclaimed. “We are very focused. We know with whom we are negotiating, we know what their positions (are) and President Trump has made his position very clear.”

The Trump administration has vowed to keep its sanctions until the United States can verify that North Korea is taking steps towards the complete denuclearization of the Korean peninsula.

Pompeo told Fox News Sunday that the Trump administration wants a full, verifiable denuclearization of the Korean Peninsula, stressing that no “no economic relief until we have achieved our ultimate objective.”

North Korea has not tested a ballistic missile or nuclear weapon for nearly a year and has said it has shuttered its main nuclear test site with plans to dismantle several more facilities.

In recent weeks, North Korea has pressed more sharply for what it sees as reciprocal concessions by the United States and other countries.

According to Voice of America (VOA), the announcement that the United States and South Korea would resume military drills comes amid slow progress on ending the North’s nuclear weapons programs in the months since the June summit between Kim and Trump, when the two leaders signed an agreement calling for the denuclearization of the Korean peninsula.

Nevertheless, Pompeo told Fox News that the prospective talks present “a good opportunity” to move toward specifics of when and how North Korea might bring about the complete, verifiable, and irreversible denuclearization of the Korea peninsula as requested by the United States in exchange for sanctions relief, among other perks.

Despite the slow progress in the Trump administration’s effort to denuclearize the Korean Peninsula, Pompeo cited the presence of favorable signs in the relationship between the United States and North Korea.

“We haven’t had any missile tests,” he noted. “There’ve been no nuclear tests, We’ve had the returns of American remains (from the Korean War of the early 1950s). These are all good steps.”

The United States hopes to finalize a U.S.-North Korea denuclearization deal by the end of the President Trump’s first term in office in January 2021, VOA points out.