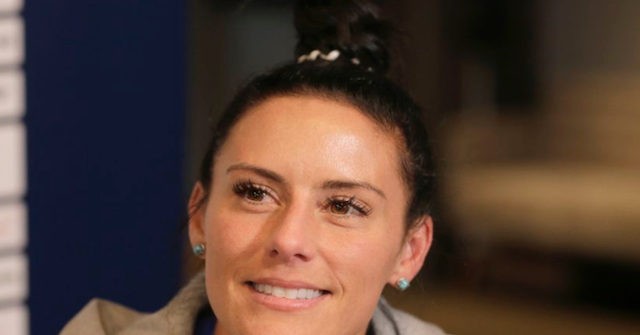 Thursday on CNN’s “New Day,” US soccer player Ali Krieger said she would “absolutely not” go to the White House if they win the World Cup because President Donald Trump is a “man that warrants no respect.”

Host Alisyn Camerota asked, “Has President Trump called or tweeted to congratulate you guys yet?”

Krieger said, “I honestly after I tweeted about that haven’t been on Twitter or focused on him at all. and so I have no idea. More importantly, Barack Obama tweeted at us which I definitely liked. I saw that one. We were all excited about that.”

Camerota said, “Speaking of what you put on Twitter, let me ask you about that. You tweeted at the president after the president tweeted about Megan Rapinoe basically saying she should, ‘win before she talks.’ He didn’t like what she was saying about some of her means of protest. You tweeted, ‘In regards to the presidents tweet today, I know women who you cannot control or grope anger you but I stand with Megan Rapinoe who will sit this one out as well. I don’t support this administration nor their fight against LGBTQ plus citizens, immigrants and our most vulnerable.’ So when you say sit this one out you meant would not go to the White House if invited?”

Krieger said, “No, absolutely not. I refuse to respect a man that warrants no respect. I feel like staying silent at times can side with the oppressor.  I didn’t want her to feel that she was having to process this all alone because a lot of us do have those similar feelings. I wanted to make sure as one of her close friends that she didn’t feel that. I feel that we are able to focus, as women, imagine that, we can multitask on two things at once. It doesn’t take a lot of mind space to tweet something out that is very important and then turn it off and be focused on the job and what we are doing here, which is to win. I refuse to just sit back and watch an abuser, a bully talk like that to my friend. I support her as a friend. I wanted to make sure that I said something that meant something to me and was important to me. That’s why I did what I did.”