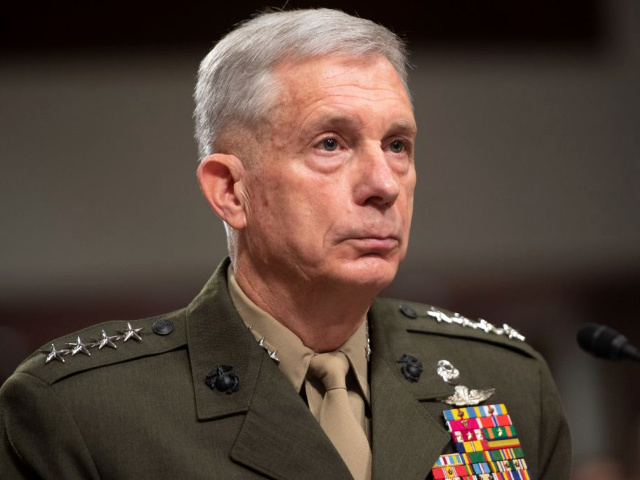 Jihadis from the Islamic State West Africa Province (ISWAP) broke away from the Nigeria-based Boko Haram terrorist group in 2016 over leadership differences. The U.S. government has treated both groups — which operate in and around Nigeria — as different entities.

The MNJTF — a coalition of troops mainly from Nigeria, Chad, Niger, Benin, and Cameroon that has been fighting Boko Haram for years — recently launched a military offensive dubbed “Operation Yacin Tafki” to push jihadis out of the Lake Chad region.

Troops from U.S. Africa Command (AFRICOM) provide some support to MNJTF’s counterterrorism efforts in the form of intelligence, training, advisers, and equipment, while avoiding direct engagement in military operations, which border the task force members’ countries.

In a press release published on Wednesday, the MNJTF revealed:

The United States Africa Command (US AFRICOM) has pledged to support the Multinational Joint Task Force in the ongoing Operation YANCIN TAFKI in the Lake Chad Area.

The Commander, Special Operations US AFRICOM, Major General Marcus Hicks gave this hint during a recent visit to the Tactical Headquarters of the Multinational Joint Task Force in Diffa, Republic of Niger.

“Discussions between the Force Commander, Major General Chikezie Ude, and General Cloutier focused on the role of the MNJTF in combating the threat of Boko Haram and the Islamic State in West Africa,” the coalition’s press statement added.

Brig. Gen. Seydou Badjie, the deputy force commander of MNJTF, reportedly commended the U.S. military for “its interests in the activities of MNJTF” and urged AFRICOM to remain engaged “in order to deal with Boko Haram.”

For the most part, the U.S. has avoided providing direct military assistance to Nigeria over the country’s alleged human rights violations.

We do not have offensive strike capabilities or authorities in those countries [where Boko Haram and ISWAP operate], so we can’t strike. We can strike in Somalia, we can strike in Libya, but not in Nigeria, Chad and the like. So we don’t have authorities there. Now, ISIS West Africa has grown. They go by different names every once in a while, but they have grown in numbers. There now in the neighborhood probably in the neighborhood of around 3 to 4,000.

Waldhauser noted that Boko Haram has about 1,000 fighters. The AFRICOM commander also said that the U.S. has intensified efforts to expand Nigeria’s intelligence, surveillance, and reconnaissance capabilities.

The most recent Global Terrorism Index (GTI), compiled by the Institute for Economics and Peace (IEP), revealed that Africa is home to half of the top ten countries with the highest number of terror-linked fatalities — Somalia, Egypt, Central African Republic, Mali, and Kenya.

“As the United States and its partners dial down operations against the Islamic State in Syria and Iraq and contemplate a withdrawal from Afghanistan, the focus of global jihadist activity will shift to Africa,” the private intelligence firm Stratfor predicted on Thursday.