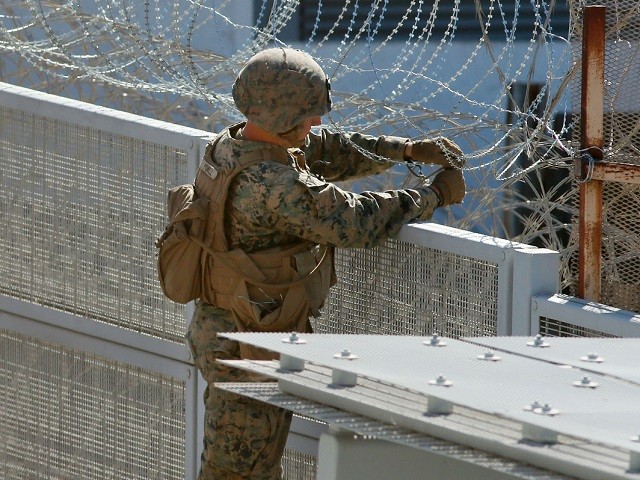 U.S. Customs and Border Protection (CBP) officers in the Tucson Sector teamed up with Department of Defense (DOD) personnel to conduct training exercises and harden ports of entry in advance of the anticipated arrival of Central American caravan migrants. Officials estimate the region could become saturated with thousands seeking asylum or crossing the border illegally.

Officers in CBP’s Office of Field Operations (OFO) are making plans and increasing readiness for the possibility that caravan migrants could make their way to the border regions of the Tucson Sector in the days or weeks ahead. In preparation, OFO officers and military personnel from the DOD began conducting training exercises on November 14, according to CBP officials. Additionally, DOD began deploying concertina wire, barricades, and fencing, as requested by CBP. The DOD efforts are part of Operation Secure Line.

The DOD operation provides for the installation of large barriers and conex boxes on the northbound lanes of the Tucson Sector ports of entry. The operation also provides for training exercises to prepare CBP and DOD personnel for the potential arrival of thousands of Central American caravan migrants.

CBP officials warned the public that these extra security measures would likely increase northbound border crossing wait times as some lanes are now closed until the situation passes.

Not everyone in Mexico is pleased with the migrants arriving in the northwest border region of Mexico. Videos posted on social media this week show Mexican citizens protesting the arrival of the caravan migrants, Breitbart News’ Editor-in-Chief Brandon Darby and border journalist Ildefonso Ortiz reported.

Tucson and Yuma Sector Border Patrol officials report ever-increasing numbers of migrants illegally crossing the border despite the fact that none of the caravan migrants have made their way to this part of the border.

These numbers are up exponentially from the previous year when Yuma Sector officials reported the apprehension of only 2,117 migrants including 1,148 FMUAs and 456 UACs. The Tucson Sector reported  5,924 total apprehensions in October 2017. Those included 356 FMUAs and 580 UACs.