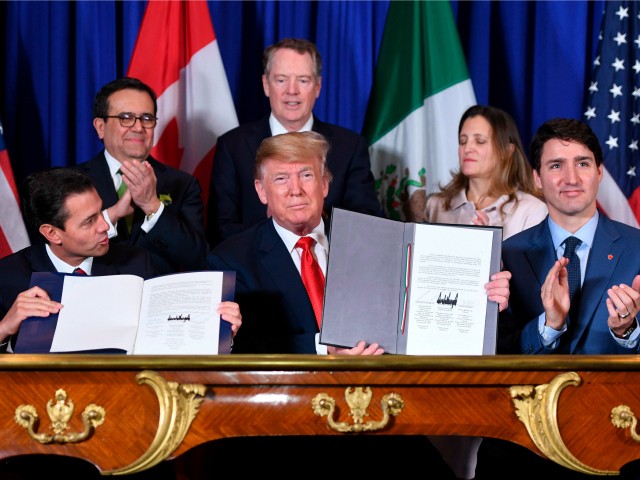 Presidents of the U.S. and Mexico and the prime minister of Canada officially signed the U.S.-Mexico-Canada trade deal at the G20 in Argentina on Friday.

“With our signatures today, we will formally declare the intention of our countries to replace NAFTA, a truly groundbreaking achievement,” said President Donald Trump:

The Trump administration worked tirelessly with leaders in Mexico to form a trade agreement that then prompted Canadian officials to swiftly travel to the U.S. in attempts to join the trade pact and form a new North American trade pact. The deal is meant to replace the old NAFTA deal and offers a host of modernizations to trade in the region.

President Trump stood by Mexican President Enrique Pena Nieto and Canadian Prime Minister Justin Trudeau as he said each of the two leaders had become “a great friend.”

Trump called the process a battle but one that makes great friendship. The three leaders then signed the monumental trade pact.

“We’ve taken a lot of barbs and a little abuse, and we got there,” said Trump. The deal now faces a battle in Congress.