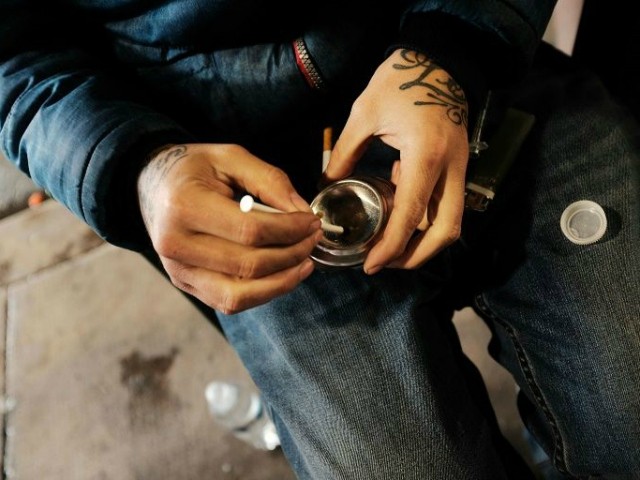 American life expectancy declined again last year according to the Centers for Disease Control (CDC), adding up to the worst four-year decline since 1915-1918, when mortality rates were driven by the infamous meat grinder of World War One and a deadly flu pandemic. Astonished medical experts pointed to drug overdose deaths as a major reason for the decline.

Overdose deaths have, in turn, reached epidemic levels due to fentanyl and other powerful synthetic opioids imported and distributed by street gangs.

The Washington Post quoted CDC data that makes the role of street drugs clear, specifically noting that legal painkillers – the focus of much attention in Washington – are not causing mortality rates to increase:

Drug overdoses set another annual record in 2017, cresting at 70,237 — up from 63,632 the year before, the government said in a companion report. The opioid epidemic continued to take a relentless toll, with 47,600 deaths in 2017 from drugs sold on the street such as fentanyl and heroin, as well as prescription narcotics. That was also a record number, driven largely by an increase in fentanyl deaths.

Since 1999, the number of drug overdose deaths has more than quadrupled. Deaths attributed to opioids were nearly six times greater in 2017 than they were in 1999.

Deaths from legal painkillers did not increase in 2017. There were 14,495 overdose deaths attributed to narcotics such as oxycodone and hydrocodone and 3,194 from methadone, which is used as a painkiller. Those totals were virtually identical to the numbers in 2016. The number of heroin deaths, 15,482, also did not rise from the previous year.

Experts quoted by the Post suggested efforts to combat the abuse of prescription painkillers, particularly their purchase and resale by gangsters, have been fairly effective. Unfortunately, this created even more demand for street drugs. “The opioid market has been completely taken over by fentanyl,” former Maryland health secretary and Johns Hopkins vice-dean Joshua M. Sharfstein lamented.

A report published Wednesday by CDC made it clear fentanyl is now the Number One cause of overdose deaths, adding more evidence to the “third wave” model of the opioid crisis: a surge in prescription painkiller abuse during the first decade of the 21st Century, followed by explosive growth in the use of heroin after prescription drug abuse declined in 2012, and now a tidal wave of fentanyl killing addicts who don’t always realize they are consuming it because street dealers mix it with heroin.

CDC researchers noted deaths from heroin have been steadily rising for years, but deaths from fentanyl doubled every year from 2013 to 2016, and 2017 was not much better. Fentanyl victims have other drugs in their system in over two-thirds of overdose fatalities, a statistic that offers grim support for the idea that addicts don’t realize cheap and deadly fentanyl has been mixed into their illicit purchases by opportunistic dealers.

This also makes it difficult to count the number of fentanyl deaths precisely, since medical examiners don’t always detect fentanyl or note it was the true cause of death in heroin and cocaine overdoses, so researchers are always careful to note fentanyl could be even more deadly than it appears.

Washington Post columnist Megan McArdle noted the pleas from medical professionals for more resources to treat addicts and suggested a radical course of action: offering mild opioids as prescription drugs to addicts to satisfy their uncontrollable craving without sending them to the streets, where fentanyl-laced heroin bombs await.

McArdle argued that addiction to opioids is so powerful that “tough love” policies of cold turkey detox and unsatisfying medical substitutes like naloxone amount to freeing the slaves of heroin by killing them:

That leaves two options: Keep doing what we’re doing and let addicts keep dying as they’re dying, until the opioid epidemic burns itself out. Or start talking about ways to make safe, reliable doses of opiates available to addicts who aren’t ready to stop. That would mean opening more methadone clinics and making it less onerous for doctors to prescribe buprenorphine, a relatively mild opioid that’s difficult to overdose on. But lowering the death toll may well require a more drastic step: legalizing prescriptions of stronger opiates.

Prescription heroin? Remember, I said you might not like the solution. I don’t like it, either — and frankly, neither do the drug policy researchers who told me it may be necessary. But when fentanyl took over the U.S. illicit drug markets, it also got a lot of addicts as hostages. We’ll never be able to rescue them unless we can first keep them alive long enough to be saved.

Olga Khazan at the Atlantic made a supporting case that the campaign to stigmatize opioids in the medical profession is making it harder for addicts to get the treatment they need, pushing them into rehab programs that offer no medication at all, or provide ineffective meds and doses that send hungry patients back to the streets in search of a better fix.

Khazan mentioned France bringing heroin overdose deaths down substantially by allowing primary care physicians to prescribe buprenorphine, a heroin substitute also highlighted by McArdle as a promising resource. She talked to addicts in hard-hit New Jersey who were aware of medical heroin substitutes and desperate to give them a shot but were unable to do so because supplies are scarce and the programs are difficult to get into.

Khazan frankly acknowledged public and medical resistance to keeping addicts alive by feeding them taxpayer-subsidized “safe” drugs to keep them from buying heroin and fentanyl on the streets, but quoted doctors who believe a gentle and forgiving strategy of “harm reduction” with plenty of second chances for relapsed addicts is preferable to stern abstinence programs that kick patients out if they don’t stay clean.

“They remain clear-eyed about the fact that some people will continue using heroin, and they try to minimize the dangers associated with its use,” she said of these kinder and gentler clinics, praising the opioid bill signed by President Donald Trump in October as a positive but insufficient step toward making harm reduction programs more widely available.

Hard-hit states like Maryland are attempting to attack the supply chain of fentanyl by seeking tougher penalties for dealers and pushing fentanyl cases into federal court – an effort that will, unfortunately, run afoul of the new mania in Washington for reducing drug sentences and releasing convicts from prison.

Those on the front lines of the drug epidemic warn that dealers are making a big push to get their deadly products into schools and hook young customers. The treatment programs endorsed by McArdle and Khazan won’t do anything to prevent new addicts from falling into the clutches of street dealers. They represent a grim but maintenance program for a terminal social disease, not an inoculation against the problem growing even worse.

If dealers don’t have to worry about long prison sentences, the only way to stop the fentanyl epidemic is to choke off the supply of drugs and gang muscle flowing across the border. It is simply the only logical course of action remaining to us. Otherwise, we may have little choice but to keep addicts alive by giving them taxpayer-funded alternatives to fentanyl, and we had better be ready for those programs to expand massively in the years ahead.