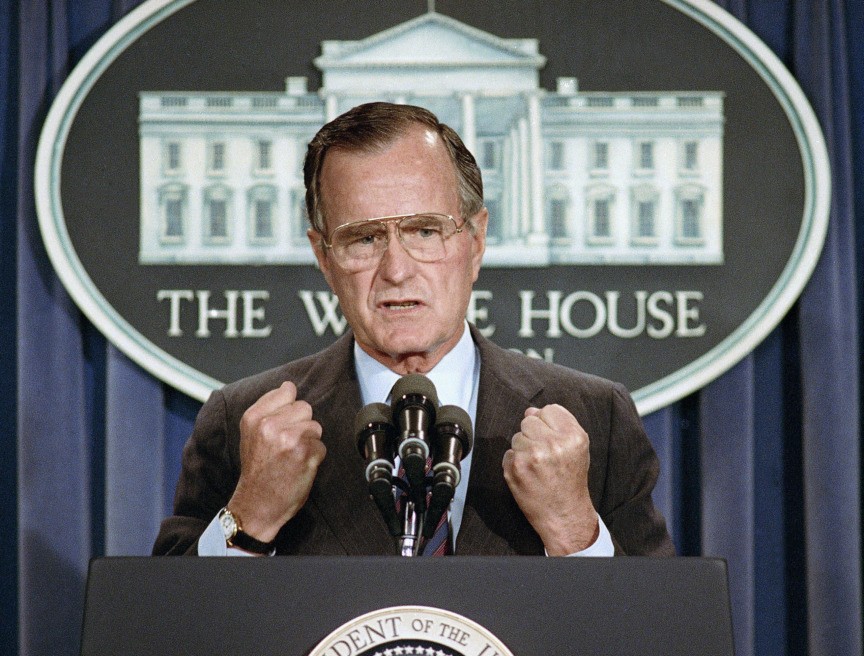 TEL AVIV – Late president George H.W. Bush was hailed as “a great friend” of Israel and Jews around the world by major American Jewish groups from both sides of the political aisle.

The powerful American-Israel Public Affairs Committee (AIPAC) described Bush as a “statesman and patriot” who “rightfully earned the deep respect of people around the world.”

AIPAC praised Bush for reversing “the despicable ‘Zionism is racism’ resolution at the United Nations” as well as playing a critical role in the rescue and mass immigration of Ethiopian Jews to Israel.

“President Bush was committed to finding a peaceful resolution of the Israeli-Palestinian conflict. As a leader who was devoted to America’s security, he understood the strategic value of the U.S. relationship with Israel, and his administration was instrumental in strengthening the military cooperation between the two democratic allies.”

The Republican Jewish Coalition released a statement calling Bush “a great friend of Israel” and “the Jewish people.”

“Bush was instrumental in saving the Jews of Ethiopia and bringing them to Israel; he worked directly with Prime Minister Yitzhak Rabin to assist Israel in bringing Jewish immigrants fleeing communism in the Soviet Union to Israel; he led the effort in the UN to repeal the ‘Zionism is Racism’ resolution; and he stood up to the aggression of Saddam Hussein, who threatened the safety and security of Israel and the entire Middle East,” the statement read.

World Jewish Congress President Ronald Lauder said, “President George H.W. Bush was a genuine American hero and a true friend of the Jewish people and the State of Israel.”

“The Jewish people will never forget the instrumental role played by the late President in making possible the dramatic airlift to freedom of Ethiopian Jewry, and his unwavering assistance in enabling Soviet Jews to emigrate,” he added.

“Despite occasional disagreements, he was a firm ally of the State of Israel and worked tirelessly to achieve an end to the Israeli-Arab conflict,” Lauder said.

“The United States lost a great leader, a friend of Israel, and a champion of Soviet and Ethiopian Jewry,” Hier said.

“First as U.S. ambassador to the UN and then during his presidency, President Bush was a friend of Israel and the Jewish people,” Hier added. “He was also instrumental in the campaign to free Soviet Jewry and in rescuing and bringing Ethiopian Jews to Israel. Tens of thousands of Jews were saved as a direct result of his intervention.”

“President Bush was an outstanding American, a veteran who courageously served his country in time of war, and a public official who left an impressive record of achievement,” AJC head David Harris said. “While in the Oval Office, he exerted particularly skillful, indeed visionary, leadership during a period of dramatic change in the world.”

“The overall record of support for endangered Jews worldwide and the quest for Arab-Israeli peace is also part of his enduring legacy,” he added, noting Bush’s efforts on behalf of Jews in the newly fallen Soviet Union, which included providing $10 billion in loan guarantees to resettle hundreds of thousands of Soviet Jews in Israel.

However, Bush lost the support of major swaths of the American Jewish community when he threatened to suspend the loan guarantees unless then-Israeli prime minister Yitzhak Shamir entered a peace process with the Palestinians and halted all settlement building. Jewish leaders, and AIPAC in particular, lobbied Congress to overturn the move but ultimately lost and the loan guarantees were delayed. Still, the episode caused Bush to lament that he was “one lonely little guy” facing an army of opponents — inferring that he had no voice in contrast to Washington’s all-powerful Israel lobby — a statement that helped cost him the 1992 election to Bill Clinton.