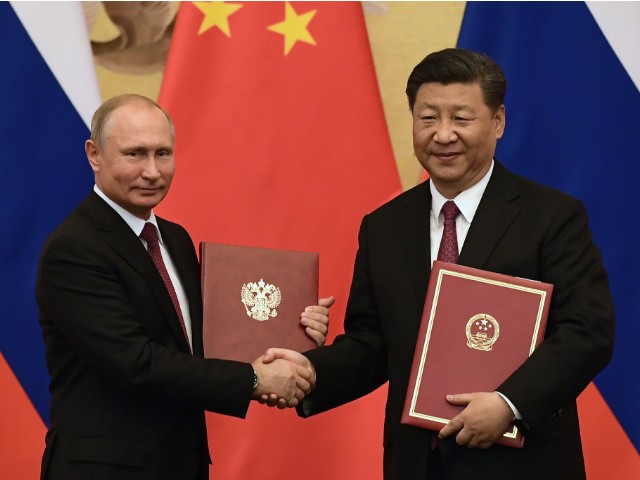 WASHINGTON, DC — The strategic relationship between Russia and China, long marred by tensions and mutual suspicions, is “likely to strengthen” further in 2019 as both countries seek to upend the “liberal democratic model” across the globe and counter U.S. objectives, warned the U.S. intelligence community (IC) in its latest Worldwide Threat Assessment released on Tuesday.

China and Russia will present a wide variety of economic, political, counterintelligence, military, and diplomatic challenges to the United States and its allies. We anticipate that they will collaborate to counter US objectives, taking advantage of rising doubts in some places about the liberal democratic model.

China and Russia are expanding cooperation with each other and through international bodies to shape global rules and standards to their benefit and present a counterweight to the United States and other Western countries.

Echoing other appraisals early last year, the Global Firepower (GFP) index, which ranks 133 countries annually, suggested that the militaries of China and Russia together outrank the U.S. armed forces, which are considered the most powerful in the world.

Threats to US national security will expand and diversify in the coming year, driven in part by China and Russia as they respectively compete more intensely with the United States and its traditional allies and partners. This competition cuts across all domains, involves a race for technological and military superiority, and is increasingly about values. Russia and China seek to shape the international system and regional security dynamics and exert influence over the politics and economies of states in all regions of the world and especially in their respective backyards.

China and Russia are more aligned than at any point since the mid-1950s, and the relationship is likely to strengthen in the coming year as some of their interests, and threat perceptions converge, particularly regarding perceived US unilateralism and interventionism and Western promotion of democratic values and human rights.

Last year, the Pentagon announced that U.S. President Donald Trump’s administration was moving away from the war on terror, choosing instead to primarily focus on deterring “strategic competitors” China and Russia.

As China and Russia seek to expand their global influence, they are eroding once well-established security norms and increasing the risk of regional conflicts, particularly in the Middle East and East Asia. At the same time, some US allies and partners are seeking greater independence from Washington in response to their perceptions of changing US policies on security and trade and are becoming more open to new bilateral and multilateral partnerships.

The United States faces a complex global foreign intelligence threat environment in 2019. Russia and China will continue to be the leading state intelligence threats to US interests, based on their services’ capabilities, intent, and broad operational scopes. Other states also pose persistent threats, notably Iran and Cuba. Geopolitical, societal, and technological changes will increase opportunities for foreign intelligence services and other entities—such as terrorists, criminals, and cyber actors—to collect on US activities and information to the detriment of US interests.

Both China and Russia maintain relations with Cuba and Iran.

Starting on the anniversary of the 9/11 attacks on the American homeland last year, Russia and China held the biggest joint military exercise in decades in a show of force rebuked by the North Atlantic Treaty Organization (NATO).

Chinese Foreign Minister Wang Yi reportedly said in April 2018 that relations with Russia were at “the best level in history.”

In June 2018, Chinese Communist Party leader Xi Jinping reportedly declared his Russian counterpart, Vladimir Putin, to be his “best, most intimate friend” amid frayed relations between Moscow and the West over Ukraine.

A year earlier, Putin reportedly said relations between China and Russia were at an “unprecedentedly high level.”

Since the collapse of Russia’s relationship with the West over Ukraine, the Sino-Russian strategic partnership has become more of a reality. Russia and China share a common desire to challenge principles of the Western-dominated international system. But their relationship is complex, with lingering mistrust on both sides.

Rocked by war and revolution in the twentieth century, both countries became brief allies after the Communist Party takeover in Beijing in 1949. … However, the two countries split ideologically during the Nikita Khrushchev era, becoming Cold War adversaries by the 1960s with a highly militarized and disputed border.

Testifying alongside other high-ranking IC members, U.S. Director of National Intelligence Daniel Coats presented the assessment to the Senate Intelligence Committee in the form of written testimony during a hearing on Tuesday.