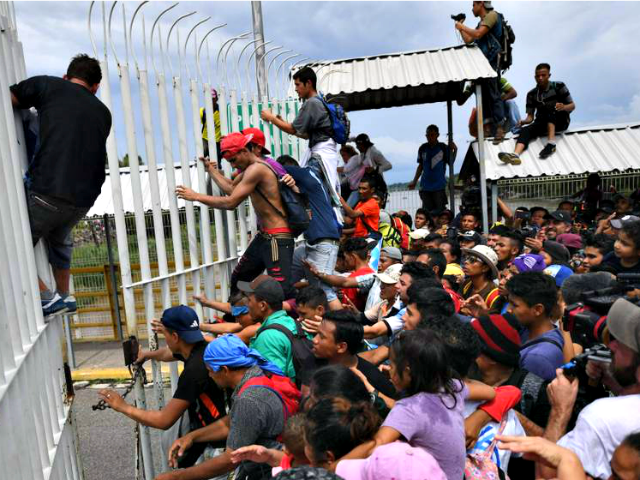 The U.S. commander overseeing the military’s response to the migrant caravan headed from Central America to the U.S. southern border said Tuesday that the caravan was unlike anything officials have seen before.

“This caravan is different from what we’ve seen in the past,” Air Force Gen. Larry O’Shaughnessy told reporters at the Pentagon. “What we have seen, is we’ve seen clearly an organization at a higher level than we’ve seen before.”

“We’ve seen violence coming out of the caravan, and we’ve seen as they’ve passed other international borders, we’ve seen them behave in a nature that is not what we’ve seen in the past,” he added.

There were reports of violence from the caravan earlier in the day. Mexican authorities arrested two Hondurans who allegedly shot at federal police officers escorting the caravan across the southern Mexican state of Chiapas. Authorities also warned about Molotov cocktail attacks from a second caravan near the Mexican border with Guatemala.

The Mexican Ambassador to the U.S., Geronimo Gutierrez, in an interview with National Public Radio on Monday, described some of the migrants as “very violent.”

“We have been trying to avoid, at all costs, violence in the border,” Gutierrez said. “Unfortunately, some of the people in the caravan have been very violent against authority, even though that they have offered the possibility of entering in compliance with immigration law and refugee status.”

Pentagon reporters were just briefed by @Norad_Northcom commander Gen. O’Shaughnessy. Said there is no top figure yet for troops that will deploy to the border. pic.twitter.com/vuEmpz80eN

O’Shaughnessy said the Pentagon has authorized an initial number of 5,239 active duty troops to assist the Department of Homeland Security (DHS) and the U.S. Customs and Border Protection (CBP) with their response.

He said there are currently more than 1,000 U.S. troops in place in southwest Texas, out of the approximately 2,670 that will be part of the initial response in the state.

O’Shaughnessy said that a similar size force would deploy to Arizona, and then California, to make up an initial deployment of 5,239 troops.

The general said he anticipated more troops to deploy as part of the operation, dubbed Operation Faithful Patriot.

That figure is in addition to the 2,092 National Guard soldiers who deployed to the border states earlier this year to help CBP with an earlier influx of migrants. O’Shaughnessy said reports that 14,000 U.S. troops would deploy were inaccurate, and that the total number has not been determined yet.

The units deploying include three combat engineering battalions with expertise in building temporary vehicle barriers and fencing, three medium-lift helicopter companies that can operate at night, and military police and medical units.

O’Shaughnessy said the CBP will be the “primary and principal members” who will be handling the migrants, but that all troops deploying will act according to standard rules for use of force within the U.S.

Asked by a reporter if the deployment was a “political stunt,” O’Shaughnessy responded: “I firmly believe that border security is national security.”