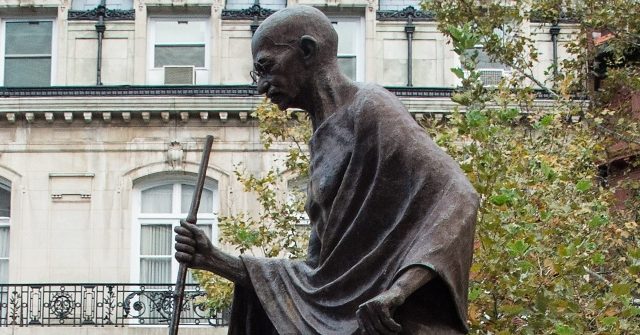 The U.S. ambassador to India apologized to the country on Wednesday for the vandalism of a Mahatma Gandhi statue in front of the Indian Embassy in Washington, DC, by violent rioters this week, the Times of India (TOI) reported on Thursday.

The extent of the damage to the statue of Gandhi – an icon of peaceful and non-violent protest – remains unknown, though D.C. locals told Asian News International (ANI) that “some unruly elements of the Black Lives Matter protesters graffitied Gandhi’s statue with profanities” using spray paint. Authorities believe the defacement took place on the night of June 2 amid ongoing protests and riots in the federal city and across the nation sparked by the death last week of George Floyd while in police custody in the state of Minnesota.

The act of vandalism prompted the Indian Embassy to notify the U.S. State Department of the attack and to register a formal complaint with local law enforcement agencies, who say an investigation into the incident has begun.

Responding to the attack on Wednesday, U.S. Ambassador to India Ken Juster apologized to the Indian Embassy on Twitter: “So sorry to see the desecration of the Gandhi statue in Washington, DC. Please accept our sincere apologies.”

On Wednesday, a coordinated team of municipal and federal law enforcement officials from the Metropolitan Police Department of the District of Columbia (MPDC), the U.S. Department of State’s Diplomatic Security Service, and the U.S. Park Police visited the site to assess the damage to the statue and conduct inquiries, the Hindustan Times reported.

According to the report, the statue of Gandhi is “one of the few statues of a foreign leader on [U.S.] federal land in Washington D.C.” and was dedicated in 2000 by the Prime Minister of India at the time, Atal Bihari Vajpayee, in the presence of then-U.S. President Bill Clinton during Vajpayee’s state visit to the U.S.

The statue was commissioned after the U.S. Congress authorized the government of India to establish and maintain a memorial “to honor Mahatma Gandhi on federal property in the District of Columbia” in 1998.