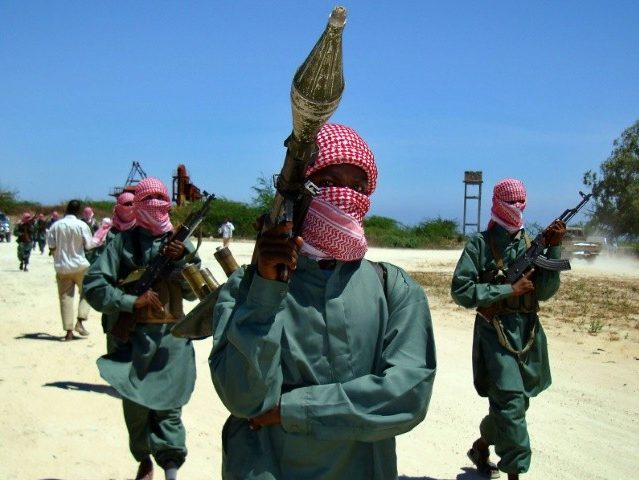 The airstrikes came after the United Nations found that the American airstrikes have failed to diminish al-Shabaab’s ability to carry out “complex asymmetric attacks in Somalia,” adding that the growing Islamic State (ISIS/ISIL) presence in the African country fueled by an influx of fighters from the fallen caliphate in Iraq and Syria also poses a menace.

Via press releases, AFRICOM announced it launched airstrikes this week to support the Somalian government’s efforts to degrade al-Shabaab, killing 37 jihadis on November 20; seven on November 21; and six jihadis and a weapons cache on November 22, adding:

Airstrikes reduce al-Shabaab’s ability to plot future attacks, disrupt its leadership networks, and degrade its freedom of maneuver within the region. Alongside our Somali and international partners, we are committed to [preventing] al-Shabaab from taking advantage of safe havens from which they can build capacity and attack the people of Somalia. In particular, the group uses portions of southern and central Somalia to plot and direct terror attacks, steal humanitarian aid, extort the local populace to fund its operations, and shelter radical terrorists.

The desired end state in East Africa is one in which terrorist organizations cannot destabilize Somalia and its neighboring states, nor threaten the interests of the U.S. and its international allies in the region.

U.S. troops assessed that the strikes did not wound or kill any civilians.

“On October 16, an airstrike left 60 dead [terrorists] in Central Somalia. This was the deadliest attack since November 2017 when 100 terrorists were killed,” Kenya’s Capital FM news outlet acknowledged.

This week’s U.S. airstrikes came after the U.N. Monitoring Group on Somalia and Eritrea warned this month that al-Shabaab and its ISIS rival in Somalia are expanding despite international efforts against both groups.

“Al-Shabaab’s presence in Puntland, in north-east Somalia, has expanded, exacerbating the challenges faced by authorities in the region. Concurrently, the Islamic State of Iraq and the Levant (ISIL) faction, largely confined to Bari region in north-east Puntland, has grown in numbers and is attracting an increasingly broad range of recruits,” the U.S. reported on November 2.

The U.N. determined that although ISIS is expanding alongside al-Shabaab in Somalia, the latter terrorist group remains the most potent threat facing the African country.

According to the U.N., America’s air campaign under U.S. President Donald Trump has failed to decimate al-Shabaab:

Al-Shabaab remains the most immediate threat to the peace, security, and stability of Somalia. Despite ongoing efforts by international forces to eliminate Al-Shabaab’s leadership, in particular through the use of airstrikes, the group’s ability to carry out complex asymmetric attacks in Somalia remains undiminished.

Citing the issue of ISIS’s weekly Al Naba newsletter last Friday, the Long War Journal (LWJ), a component of the Foundation for Defense of Democracies (FDD) think tank, reported that Abu Bakr al-Baghdadi’s organization has directly threatened to displace al-Shabaab as the top group in Somalia.

Both groups are competing for territory, influence, and fighters.

The U.S. learned ISIS continues to mainly target “disaffected members of Al-Shabaab in southern Somalia” for recruitment, a move that is likely to infuriate the al-Qaeda wing.

According to the U.N., the U.S. air campaign is making an impact on ISIS’s operations in Somalia.

“Since the commencement of United States air strikes, ISIL operations in Puntland have been at an ebb, and it appears that the group has entered a period of retrenchment and reorganization,” the U.N. reported on November 9. “However, it is apparent that ISIL in Iraq and the Syrian Arab Republic continues to view Somalia as an important avenue for future expansion.”