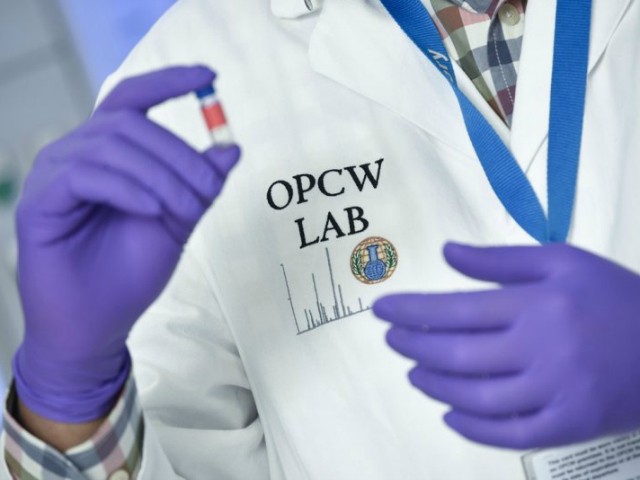 The U.S. envoy to a meeting of the Organization for the Prohibition of Chemical Weapons (OPCW) accused Iran on Thursday of developing banned chemical weapons and failing to disclose its activities as required by the 1997 Chemical Weapons Convention.

AFP summarized the allegations made by U.S. Ambassador Kenneth Ward at Thursday’s meeting of the OPCW:

“The United States has had longstanding concerns that Iran maintains a chemical weapons program that it failed to declare to the OPCW,” Ambassador Ward told a five-yearly meeting on the body’s future.

“The U.S. is also concerned that Iran is pursuing central nervous system-acting chemicals for offensive purposes.”

Ward said Iran had failed to declare the transfer of chemical-filled shells sent to Libya in the 1980s despite an appeal by the OPCW to identify their origin. They were found after the death of Libyan leader Moammar Quaddafi in 2011.

“They were clearly of Iranian origin as evidenced by the farsi writing on the boxes containing the artillery shells,” he said.

Iran had also failed to declare a “chemical weapons filling capability” despite the discovery of toxic shells and bombs in Libya and also in Iraq.

Finally, Iran had failed to declare riot control agents despite having marketed them at defense expos, he added.

Iran’s delegate to the OPCW conference, Gholam Hossein Dehghani, more vaguely accused some other nations of “hypocritical behavior” because they indulge the use of chemical weapons against civilians by “terrorist groups.”

Russia supports Iran and claims Tehran has fully complied with the relevant international laws and agreements.

Two U.S. officials told the Associated Press last week about the Trump administration’s plans to accuse Iran of violating the 1997 Chemical Weapons Convention. The officials said U.S. lawmakers were notified last Friday that a complaint would be filed against Iran at The Hague.

Analyst Ben Taleblu of the Foundation for Defense of Democracies told Voice of America News that Iran benefits from the reluctance of international agencies like the OPCW to accept U.S. intelligence reports and the widespread perception that Iran is among the world’s leading victims of chemical warfare, its troops having been gassed by Saddam Hussein’s Iraq during the brutal Iran-Iraq War. There have long been suspicions that Iran retaliated against Iraq with chemical weapons of its own during the war, but analysts such as the Nuclear Threat Initiative in Washington deemed the evidence against Iran inconclusive.

“The fact that this archival U.S. intelligence material exists and is not engaged with or dismissed is part of a larger problem because it leads analysts to take Iran’s war account at face value,” said Taleblu.

“While I will be the first to say that Iran’s chemical weapons experience in the war was horrific, the fact that Iran learned the lessons of deterrence the hard way is what made it so active in weapons of mass destruction and missiles after the war,” he added.