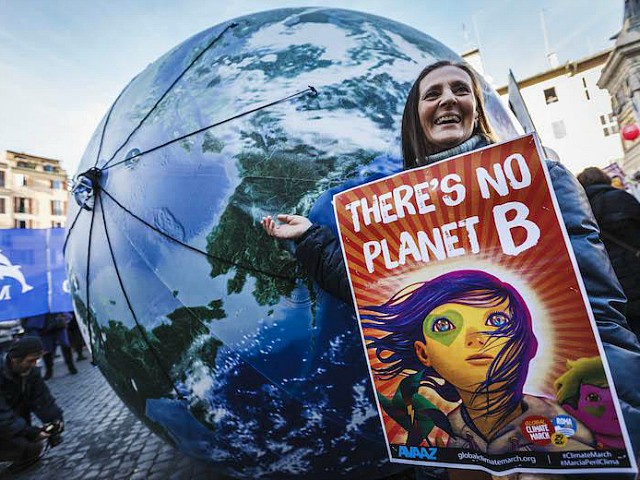 In its “Emissions Gap Report 2018,” the United Nations (U.N.) declared Tuesday that total annual greenhouse gases emissions reached a record high in 2017 and that “more ambitious” measures are needed by 2020 to keep global warming below established goals.

Current national commitments “are inadequate to bridge the emissions gap in 2030,” the U.N. warned in its report. “Technically, it is still possible to bridge the gap to ensure global warming stays well below 2°C and 1.5°C,” but if global ambitions are not increased before 2030, exceeding the 1.5º C goal “can no longer be avoided.”

“Now more than ever, unprecedented and urgent action is required by all nations,” the report declared. “The assessment of actions by the G20 countries indicates that this is yet to happen; in fact, global CO2  emissions increased in 2017 after three years of stagnation.”

In its report, the United Nations suggested that the world is on the path to climate disaster if drastic measures are not implemented in the near future.

“Global greenhouse gas emissions show no signs of peaking,” the report reads. Global CO2 emissions from energy and industry increased in 2017, while total annual greenhouse gases emissions reached a “record high” in 2017. Global emissions in 2030 need to be 55 percent lower than in 2017 to put the world on a “least-cost pathway” to limiting global warming to 1.5º C.

Throughout the report, the U.N. takes for granted that the global warming limits of 2°C and 1.5°C are unquestionably accurate and non-negotiable, despite the fact that they are based on untested speculation of possible scenarios of what will happen if such warming occurs.

As usual, the U.N. warnings come down to an appeal for dramatic action at the national level.

Countries need to “increase effectiveness of domestic policy to achieve the temperature goals of the Paris Agreement,” the report states. “To bridge the 2030 emissions gap and ensure long-term decarbonization consistent with the Paris Agreement goals, countries must enhance their mitigation ambition.”

In the end, the United Nations Organization is looking for funding, and they appeal to nations to establish substantial taxation to penalize citizens for the use of inexpensive fossil fuels.

“Fiscal policy reform can play a key role in creating strong incentives for low-carbon investments and reducing GHG emissions,” the reports states. “Revenues from carbon pricing can be used for reducing other taxes, increase spending on social issues and/or compensating low-income households.”

The report urges nations to use the coercive measures at their disposal, which are primarily economic, to compel citizens to accelerate innovation in alternative energy technologies, whether or not they are financially self-sustaining.

The United States has proven to be a frustrating obstacle in the United Nations climate program.

President Donald Trump announced last year his intention to withdraw from the U.N. Paris climate accord, yet the United States has become a “world leader in reducing emissions” because of flourishing natural-gas production as well as better technological controls.

Meanwhile, the bullhorns of climate alarmism, such as the UK-based Guardian newspaper, have taken advantage of the U.N. report to continue offering doomsday climate forecasts reminiscent of the population hoaxes of the 1970s.

“World must triple efforts or face catastrophic climate change,” the Guardian headline trumpeted Tuesday, while warning that if emissions are allowed to continue rising, the world will experience “sea-level rises, droughts, floods and other extreme weather events.”