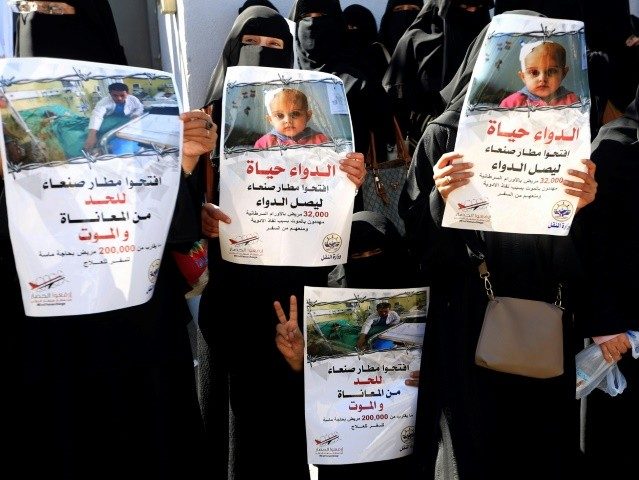 There are “millions of Yemenis who are hungry and sick and scared and desperate and starving, but they’ve all got one message, and their message is that they’re at the end of their tether and they want this war to stop,” Mark Lowcock observed, the Associated Press (AP) reported.

Lowcock, who recently traveled to Yemen, reportedly added that an unprecedented 250,000 people are facing a “catastrophe” from a lack of food.

“He said that for the first time, 250,000 Yemenis are in Phase 5 on the global scale for classifying the severity and magnitude of food insecurity and malnutrition — the severest level, defined as people facing ‘starvation, death, and destitution,’” AP noted.

There has been “a significant, dramatic deterioration” of the humanitarian situation in the war-ravaged nation and “it’s alarming,” he proclaimed.

The Yemenis facing a “catastrophe” are mainly concentrated in the four provinces of Taiz, Saada, Hajja, and Hodeida, “where the conflict is raging quite intensely,” he pointed out.

South Sudan is the only other country in the world where as many people as in Yemen are in Phase 5, with 25,000 people affected, Lowcock said.

Nearly 5 million Yemenis also find themselves in Phase 4, which is defined as the “emergency” level, in which people suffer from severe hunger and “very high acute malnutrition and excess mortality” or an extreme loss of income that will lead to severe food shortages, Lowcock noted, according to AP.

Consistent with Lowcock’s remarks, the inter-agency report issued by the U.N.’s humanitarian divisions on December 7 explained that about 16 million people in Yemen have food insecurity ranging from crisis to catastrophic levels, including 10.8 million at crisis levels, 5 million at emergency levels, and 65,000 people at catastrophic levels.

The report — dubbed the Integrated Food Security Phase Classification (IPC) — concluded that absent additional large-scale humanitarian aid, over 20 million people would suffer from food insecurities and the catastrophe level would more than triple to 240,000.

Martin Griffiths, the U.N. special envoy for Yemen, told reporters on Monday that peace negotiations in Sweden have led to progress “on a number of issues.”

In a press release, the U.N. announced Monday:

After 5 days of talks, representatives from the Yemeni Government and Houthi opposition discussed the re-opening of the airport in the Yemeni capital, Sana’a, the de-escalation of hostilities in the cities of Taiz and [Hodeida], and the exchange of prisoners: media reports suggest that the combined lists of prisoners to be exchanged on both sides adds up to around 15,000 names.

However, the inter-agency report noted that the crisis continues in Yemen.

“For the first time, food security assessments have confirmed the worst levels of hunger in Yemen,” the report said, adding:

Food insecurity is more severe in the areas with active fighting, and is particularly affecting IDPs [internally displaced persons] and host families, marginalized groups, as well as landless wage labourers facing difficulties in accessing basic services and conducting livelihood activities. Overall, there are more than 3 million IDPs in Yemen who face comparatively worse food security outcomes. …Armed conflict remains the main driver of food insecurity in Yemen, curtailing food access for both the displaced and the host communities. The food security crisis is further exacerbated by extremely high food prices, the liquidity crisis, disrupted livelihoods, and high levels of unemployment

Henrietta Fore, executive director of the U.N. children agency, reportedly added, ”In a war waged by adults, it is the country’s children who suffer first and suffer most … thousands of Yemeni children could die from severe malnutrition if conditions, including conflict and economic crisis, do not improve soon.”

After the Iran-allied Shiite Houthis seized the Yemeni capital of Sanaa in late 2014, a U.S.-backed coalition led by Saudi Arabia launched an offensive to restore the internationally-recognized government of President Abed Rabbo Mansour Hadi.

Saudi-led coalition troops have been combating the Iran-backed Houthis ever since, ultimately triggering the world’s worst humanitarian crisis.

“Saudi-led airstrikes have hit schools, hospitals, and wedding parties and killed thousands of Yemeni civilians. The Houthis have fired long-range missiles into Saudi Arabia and targeted vessels in the Red Sea. Civilians have borne the brunt of the conflict, which has killed over 10,000 people and created the world’s worst humanitarian crisis,” AP noted.

The U.N. reportedly plans to provide aid to 15 million people next year and is expected to request $4 billion in assistance.