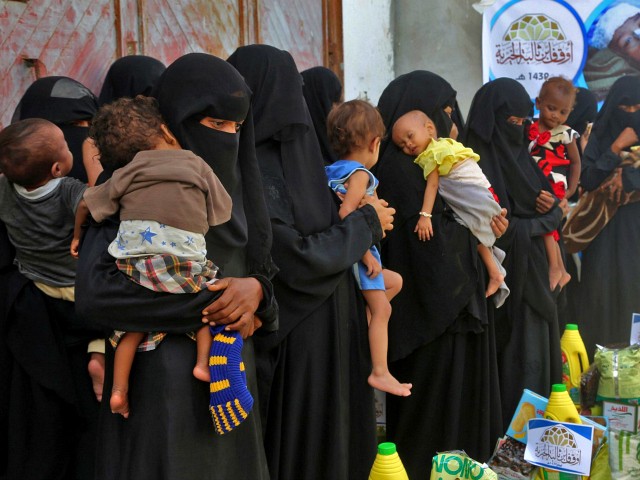 About 70 percent of girls in Yemen are forced to marry before they reach the age of 18 as “a coping strategy” against the “worsening” humanitarian crisis in the country driven by hunger and disease, a United Nations official declared on Monday.

Speaking about the depth of the “world’s worst humanitarian crisis” in Yemen during an event hosted by the U.N. General Assembly in New York on Monday, Lise Grande, the resident and humanitarian coordinator for the international body in Yemen, said:

At least one child is dying every 10 minutes from causes that are linked to the war. We estimate that 10,000 have died because of the humanitarian crisis. … 70 percent of girls are now being married before 18 as a coping strategy, and we know with grave concern that there are more than 2,600 cases of child recruitment. Colleagues are perhaps aware that 60 percent of the entire population — that is 18 million people are hungry. Eight and half million have absolutely no idea when they wake up in the morning where they will find their next meal.

Grande noted that the situation is “worsening.” She explained:

When we say the trends are worsening this is what we mean — the number of people in that category [hungry] has increased by 25 percent in the last 12 months. If we don’t do something now about the crisis, we estimate that 10 million more Yemenis will slip into pre-famine conditions by the end of the year. … It is a grim but wholly unshakeable fact that we are losing the battle to prevent famine in Yemen. … 7 million people are malnourished.

The U.N. official did acknowledge that the nearly $2 billion donated by various nations has made a “remarkable” difference, averting the death of millions of people in Yemen.

Nevertheless, she urged the international community to take more action, stressing that “Yemen may collapse” without additional aid.

The U.N. Office for the Coordination of Humanitarian Affairs (OCHA) pointed out on Monday:

Despite this progress, humanitarian partners continue to face significant challenges. These include impediments to humanitarian action such as movement restrictions, attempted interference and harassment, as well as increasing needs due to fluctuating commercial import levels and collapsing basic services. Progress in the response is also taking place against the backdrop of escalating conflict and growing concerns over [the] protection of civilians.

The war in Yemen, the Arab world’s most impoverished country even before the conflict, has been raging since March 2015 when a Saudi-led coalition launched a military campaign against the Iran-backed Shiite Houthi rebels to restore the internationally-recognized Yemeni government.

Some 22.2 million people, including 2 million internally displaced people and 1 million returnees require humanitarian aid or protection in Yemen. Partners estimate that 8.4 million people are severely food insecure, and a further 10 million could fall into the same status by the end of the year without urgent action.