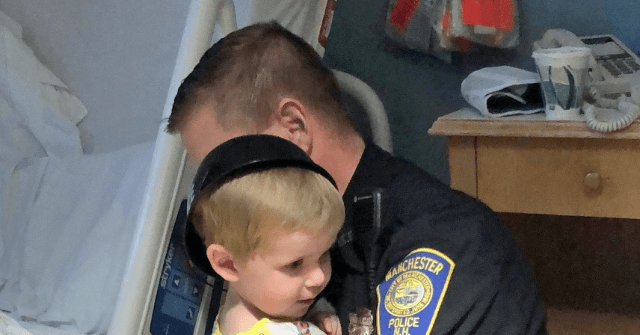 A two-year-old boy recovering from surgery who insisted that he not leave the hospital unless he had the chance to hug a police officer got his wish on Wednesday.

Elliot Hospital and Health System in Manchester, New Hampshire, said the boy told nurses he would not leave the hospital unless he got a hug from a police officer to ensure he would feel better once he was discharged, WJW reported.

The boy, named Brooks, spent the past two days at the hospital recovering from getting his tonsils taken out.

“There were only so many popsicles he could eat,” Shannon Bettencourt, Brooks’ mom, told Boston 25 News. “He started wandering the ward and told us he was looking for a police officer to hug and the nurses heard him say that so they found one for him.”

So staff at the hospital arranged for the police officer on duty at the emergency room, Officer Tony Battistelli, to come pay him a visit.

“The patient got his hug– and an extra-special badge ceremony send-off! We know that sometimes special “medicine” is needed to complete a patient’s treatment!” the hospital wrote.