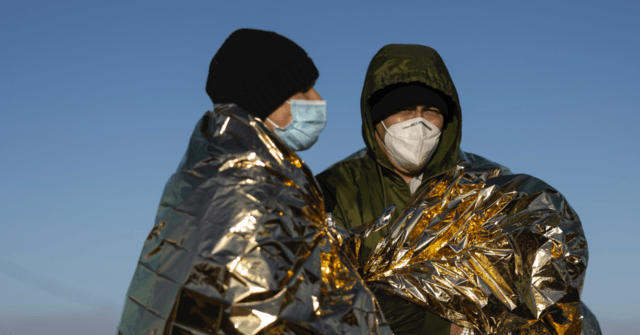 An estimated two-thirds of illegal migrants crossing the English Channel reach Britain suffering from hypothermia and other injuries sustained at sea, once again demonstrating the dangerous nature of the human trafficking gangs who callously risk the lives of people wishing to get to the UK.

A freedom of information request from the left-wing Guardian newspaper of Home Office data from January to June of last year has found that out of the approximate 6,000 illegal migrants who crossed the English Channel, 4,075 were suffering from hypothermia, a dangerous condition when body temperatures drop below 35°C (95°F).

On top of this, 354 migrants were suffering from burns incurred during the illegal journey across the busy waterway and another 27 sustained broken bones.

Commenting on the report, Migration Watch UK chairman Alp Mehmet told Breitbart London: “Migrants and traffickers are well aware of how treacherous the journey is, especially at this time of year.

“But as long as the government fails to return those who arrive or who are picked up by UK vessels, people will continue to come this way despite the risks.”

A Home Office spokesperson said: “People should seek asylum in the first safe country they reach and not risk their lives making these dangerous and unnecessary journeys.

“We have measures in place to ensure people arriving in the UK via small boats are treated appropriately, this includes onsite medical care and water. Anyone in need of urgent care is immediately transferred to a local hospital.”

While the drownings of migrants have become a common occurrence in the Mediterranean where ruthless people smugglers send migrants in often unseaworthy vessels to try to reach Europe, frequent deaths in the English Channel is a relatively new phenomenon as more illegals attempt the journey instead of trying to sneak into the country via other means.

Amid record waves of illegal immigration across the treacherous waterway last year, a record 27 migrants, including a small child and a pregnant woman, died in just one disaster in November. According to the Missing Migrant Project, a total of 44 people were recorded as either having gone missing or drowning last year.

While the tragedy in November spurred outrage in both Paris and London, the two respective governments have so far failed to come to an agreement on the migrant crisis or indeed the return of illegals. It has been suggested any prospect for a deal to be reached will have to wait until after the French presidential election in April, as President Emmanuel Macron is unlikely to take the risk of appearing to concede to English demands before voters go to the polls.

The French government, including Mr Macron, has consistently blamed the British government for the migrant crisis, alleging that a lax approach from the UK government towards illegal migrants working in the UK — often in modern slavery conditions — has resulted in the country becoming economically attractive.

Shortly after the drowning of the 27 migrants, French Interior Minister Gérald Darmanin said that migrants are “attracted by England, especially the labour market which means you can work in England without any identification.”

These sentiments were backed up by Brexit leader Nigel Farage, who said at the time: “You can put 20,000 police on the beaches in France but if the pull factors remain as strong here, namely four-star accommodation, three square meals a day, healthcare, dental care, spending money and the massive illegal economy that thrives in Britain with slave conditions, although nobody dares want to talk about that whether it is in Leicester or wherever it is.”

Migrant Crisis: Macron Says British Responsible ‘For Those Who Die at Sea’ https://t.co/idlIvEZwiv