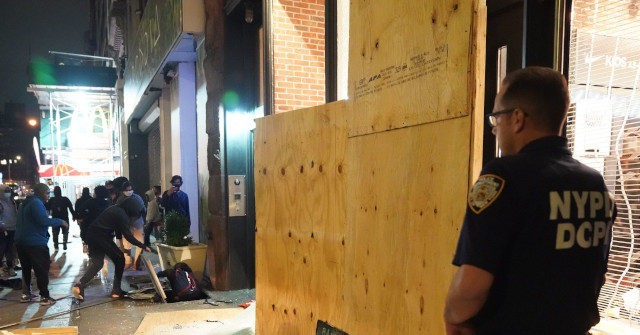 June 4 (UPI) — Protests nationwide have become more peaceful since Minnesota authorities charged all four officers involved in the death of George Floyd, but violence continued in some cities — including New York City, where three officers were badly injured by an armed assailant.

The New York City Police Department said early Thursday three officers were attacked by the suspect in Brooklyn, who stabbed one of the policemen in the neck and then stole a handgun and shot two others before he himself was shot.

“We had a chaotic scene,” NYPD Commissioner Dermot Shea told reporters early Thursday. “We had two police officers shot in the hand, and we have a third police officer that is stabbed in the neck. “All police officers, at this point in time … are in stable condition and are expected to recover.”

Officials said the attacker is in critical condition.

In Washington, D.C., mostly peaceful demonstrations went late into the night near the U.S. Capitol and the White House — which had been blocked off by police — as well as the Trump International Hotel. There was a beefed-up federal and local police presence in the city, which saw repeated violence and vandalism over the past week.

The show of force, ordered by U.S. Attorney William Barr after violence flared in Washington earlier in the week, included federal agents, troops and police.

In Los Angeles, Mayor Eric Garcetti said he plans to lift the city’s curfew on Thursday. Pressure has been building on Garcetti to make the move.

The suit argues that the curfews constitute an “extraordinary suppression of all political protest in the evening hours,” and the ACLU said they violate the First Amendment as well as the U.S. Constitution’s guarantee of freedom of movement.

“The City and County of Los Angeles are attempting to use these curfews to suppress Black Lives Matter-L.A.’s right to protest,” said group co-founder Melina Abdullah.

In Seattle, thousands of protesters rallied in the city’s Capitol Hill neighborhood and at City Hall.

Just before a citywide curfew took effect at 9 p.m., Seattle Mayor Jenny Durkan and Police Chief Carmen Best announced it would be lifted effective immediately. They said they decided to rescind the curfew following feedback from community leaders and protesters who “wanted to ensure no peaceful individuals” were arrested.

“Chief Best believes we can balance public safety and ensure peaceful protests can continue without a curfew,” Durkan said.