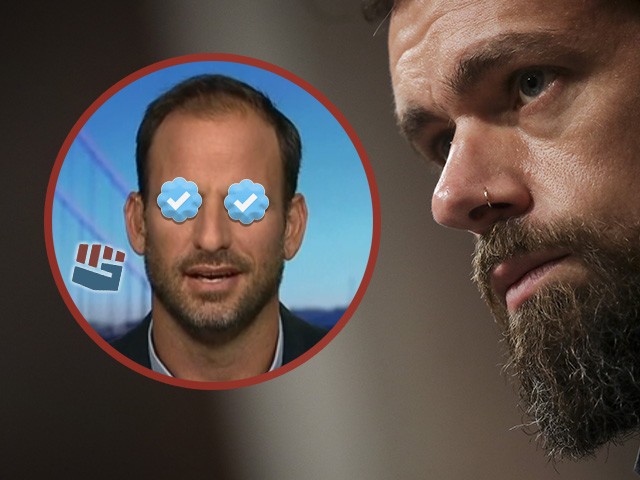 Twitter has acknowledged that when it decides to officially “verify” an account by adding a blue checkmark next to its name, it is effectively an endorsement and promotion of that account.

Testifying before Congress last month, Twitter CEO Jack Dorsey acknowledged in an exchange with Rep. John Shimkus (R-IL) that verified accounts are given special privileges and expanded visibility on the platform.

“That was my next question” Rep. Shimkus interjected. “You do prioritize content shared by verified users, currently?”

“We do have signals that do that” admitted Dorsey.

The fact that Twitter both prioritizes verified accounts in its algorithm and acknowledges that verification is, in effect, a stamp of approval from the site raises questions about the accounts that the company chooses to support.

One of those accounts belongs to an anonymous online activist group called Sleeping Giants. The Sleeping Giants account was created on or about November 16 2016, in direct response to the Republican successes in the 2016 elections. At its origin, its sole focus was spreading slander to Breitbart News’ advertisers, including false charges of racism, anti-semitism and white nationalism. The group’s modus operandi is to encourage its followers to intimidate and harass the advertisers of conservative media with deceptive practices and with inaccurate information until those advertisers sever ties.

@jonfavs Just started this effort to call out advertisers on Breitbart to choke them out. A couple of companies have already pulled out.

Twitter verified the group within a few short months of its founding. In so doing, Twitter took a deliberate and active step to support Sleeping Giants’ mission to take out Breitbart News. Twitter actively aided and abetted that goal by among other things prioritizing and enhancing the visibility of Sleeping Giants’ tweets. And, Twitter did so when the group was entirely anonymous and operating in complete secrecy, with its leadership and official members unknown. While Twitter doesn’t require a name behind every account, most “brand” accounts (like Wendys or Target) are identified and known companies, with managers and staff — they are not anonymous.

Twitter will neither explain why Sleeping Giants was verified, based on what criteria, and/or who made the decision. A Twitter spokesman told Breitbart News: “We don’t comment on individual accounts for privacy and security reasons. For background, the verification process has currently been deprioritized and is being entirely overhauled.”

Sleeping Giants originally targeted Breitbart News with this campaign, but has since expanded its list of targets to include other conservative media including Fox News’ Tucker Carlson.

And though they at times claim not to be political, how about this recent gem:

We don’t wade into political races really, but this one matters. Steve King is a fucking racist. Donate and support @Scholten4Iowa. https://t.co/mUffF1IheP