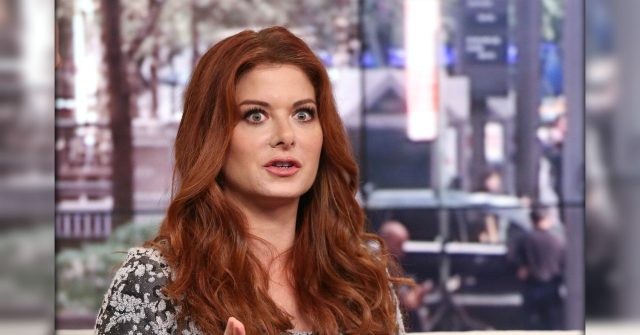 Actress Debra Messing got hit with a Twitter fact check after Breitbart News reported that she posted a fake photo in an attempt to conflate President Donald Trump and Adolf Hitler.

Twitter acknowledged that Messing’s photo of Hitler holding a Bible was doctored and that the original historic photo doesn’t show the Nazi leader holding a Bible.  The Will & Grace actress juxtaposed the fake Hitler photo with a recent photo of President Trump holding a Bible in front of St. John’s church, which was vandalized and set on fire by rioters over the weekend.

“A dog whistle to white nationalists and Nazis,” Messing wrote.

A dog whistle to white nationalists and Nazis. pic.twitter.com/FXnOGlkwjc

Messing’s tweet now features a “Manipulated Media” link, which takes users to a page that explains why the actress’s photo is fake. “BuzzFeed reporters and Snopes concluded that an image circulating of Adolf Hitler holding a Bible is edited, after some people were using side-by-side images to draw parallels to President Trump,” the Twitter fact check reads.

Breitbart News reported Tuesday on the fake Hitler image,  noting that Twitter had allowed Messing’s tweet to go unchecked for at least a few hours. The false tweet has been retweeted more than 12,000 times.

Left-wing Buzzfeed News reporter Craig Silverman noted earlier that Messing’s image was photoshopped to add a Bible. “Please check stuff before you spread it,” he tweeted to the actress. “The Hitler photo is fake.”

Please check stuff before you spread it. The Hitler photo is fake. https://t.co/hVLlQiSO4q

The left-wing Snopes also determined that Messing’s photo was a phony.

Here’s the book on this photo.
https://t.co/ChVvyUTMfb

Twitter announced earlier this year that it is cracking down on fake media, saying that it will be banning any media that the site deems to be “synthetic or manipulated” and is “likely to cause harm.” But many users responded with skepticism, saying that the social media giant is really trying to suppress influential memes ahead of the 2020 election.

In recent days, Twitter has begun fact-checking and flagging President Donald Trump’s tweets. In one instance, Twitter hid a tweet from the president because it deemed that the commander in chief was “glorifying” violence with his comment about rioters — “when the looting starts, the shooting starts.”

But Twitter has allowed users to coordinate looting on its platform without flagging those posts for violating its terms of service.