For the second time, Twitter is allowing hacked data from the Christian crowdfunding site GiveSendGo to spread freely on the platform, despite its seemingly stringent policies against sharing hacked material. This time, the Masters of the Universe are allowing users to spread hacked data on the site’s Freedom Convoy fundraiser.

GiveSendGo was hacked after the platform was used to raise nearly $10 million for the Canadian Freedom Convoy, the trucker protest which has earned the support of freedom-lovers around the world for its successful defiance of Canada’s draconian coronavirus regime. Individuals including those with “blue check” verified accounts used Twitter to spread information obtained in the hack, such as the names of donors to the Freedom Convoy fundraiser. 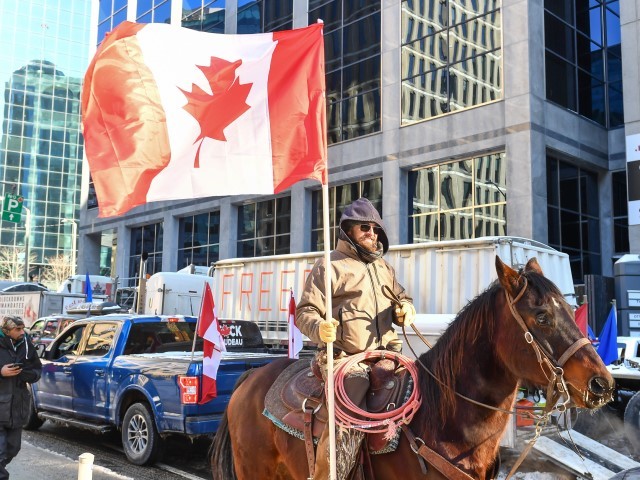 OTTAWA, ON – FEBRUARY 05: A supporter of the Freedom Convoy rides on horseback down Metcalfe Street on February 5, 2022 in Ottawa, Canada. Truckers continue their rally over the weekend near Parliament Hill in hopes of pressuring the government to roll back COVID-19 public health regulations and mandates. (Minas Panagiotakis/Getty Images) 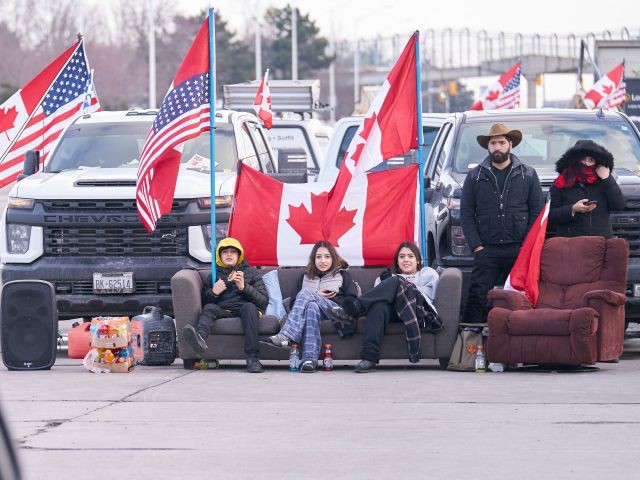 Protestors against Covid-19 vaccine mandates sit on a couch as the group blocks the roadway at the Ambassador Bridge border crossing in Windsor, Ontario, Canada on February 9, 2022. (Photo by Geoff Robins/AFP via Getty Images)

Twitter has clear policies against sharing any material that has been obtained through “Unauthorized access or interception, or access that exceeds authorization (for example, from an insider), to a computer, network or electronic device, including breaches or intrusions.”

The policy was created amid media hysteria about “Russian hackers” influencing American elections, and as such the wording is quite strict. Even “disclosing materials accessed legitimately outside of approved systems or networks” counts as a hack, according to Twitter’s definition.

Twitter used the “hacked materials” policy to justify its censorship of the Hunter Biden “laptop from hell” story before the 2020 election. While the company later backtracked and said it was wrong to apply the policy, the suppression was enough to prevent it from reaching many undecided voters on the platform.

GiveSendGo became the primary mechanism for supporters to send funds to the truckers after GoFundMe, a far-left funding platform, froze and then threatened to redirect funds that had been raised on its platform.

GiveSendGo has defied orders from the Ontario government to freeze the truckers’ funds.

“The funds from the Freedom Convoy are not frozen contrary to what you might be hearing on the news,” said the platform in a statement. “GiveSendGo is working with many different campaign organizers to find the most effective legal ways to continue funds flowing.”

While TD Bank has shut down the Freedom Convoy’s charity account, there are many other legal methods for the funds to reach the truckers, such as through untraceable cryptocurrencies like Monero.

This is not the first time GiveSendGo has been targeted by hackers. The last time occurred when the platform was used to raise funds for Kyle Rittenhouse, after GoFundMe banned support for him on its platform. Then, as now, Twitter did little to stop the spread of hacked data.