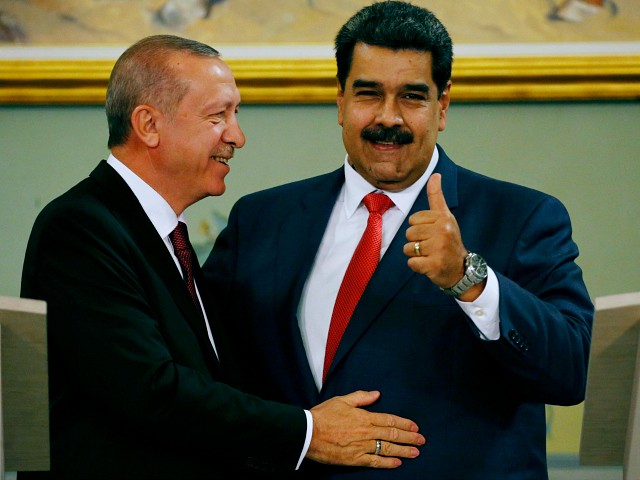 Turkish President Recep Erdogan praised Venezuelan dictator Nicolás Maduro during a meeting in Caracas on Monday for his support towards the Islamic world and the ongoing battle against “Islamophobia.”

The Turkish leader made the remarks during a joint press conference with Maduro in Caracas, where he arrived late Sunday as part of his official tour of Latin America.

“Maduro’s participation in the extraordinary summit of the Islamic Cooperation Organization on Jerusalem is a powerful message to the world,” Erdogan said about their meeting this year to discuss their opposition to Israel. “This is a time where there is a lot of Islamaphobia around the world, so President Maduro’s support is very important to teach the world about acceptance.”

Erdogan went on to pledge stronger economic ties between the two countries as Maduro attempts to forge relationships with authoritarian regimes around the world that will help reduce the impact of the humanitarian crisis currently affecting his country.

“We are making efforts to diversify and deepen cooperation with Venezuela in every field through win-win understanding,” he said. “We need to increase Turkey’s exports to Venezuela and we need to make our trade more stable and more sustainable. We have the opportunity to meet a large part of Venezuela’s needs. I believe this to be an important responsibility falls to our esteemed businessmen.”

Erdogan also criticized efforts led by the United States and other international allies to sanction the Maduro regime in response to its corruption, lack of democracy, and extensive human rights abuses.

“Trade restrictions and unilateral sanctions do not seem good to us, they are very wrong. These attempts will only further deepen instabilities, you cannot punish an entire people for political disagreements based on bitter experiences of the past,” Erdogan explained. “Turkey is on the side of Venezuela regarding the attacks and sabotages that Maduro is subject to. Thanks to the support of the Venezuelan people, I am sure he will beat the attempts to attack Venezuela.”

The two leaders concluded the meeting by signing a range of joint agreements regarding the strengthening of political and economic ties.

Relations between the two countries began to flourish in May after Maduro attended an anti-Israel meeting in Turkey held by the Organization of Islamic Cooperation (OIC) that was primarily a response to President Donald Trump’s decision to move the American embassy in Israel from Tel Aviv to Jerusalem. During the meeting, Maduro denounced Trump’s decision as a “declaration of war against the Arab people, the Muslim people, and the good people of the world,” while Erdogan declared that the U.S. had become a “partner in the bloodshed.”

In September, Maduro sparked international fury after he was photographed eating steak and smoking cigars at one of the most expensive restaurants in Istanbul. Critics pointed to the stark contrast in lifestyle between himself and his people. A recent report found that 80 percent of Venezuelans cannot acquire enough food to feed themselves properly on a daily basis.