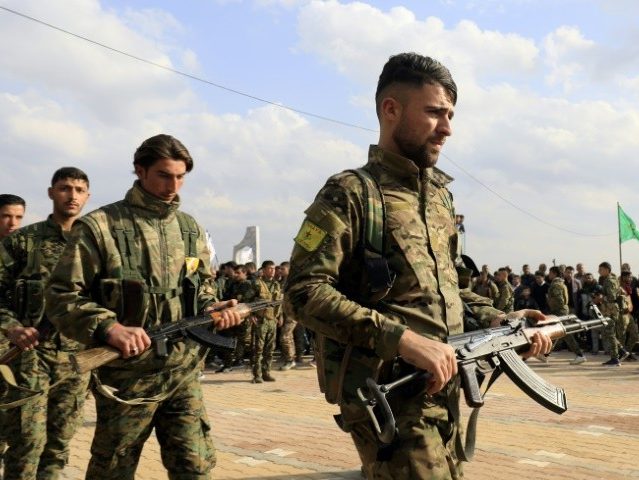 Turkey’s foreign minister claimed that the United States was struggling to withdraw troops from Syria because it had complicated the battlefield with its support of “terrorist” groups and that only severing ties with the Syrian Kurdish groups Turkey opposes could fix the problem.

America’s most reliable battlefield allies in Syria are the members of the People’s Protection Units (YPG/YPJ), the Syrian Kurdish militia controlling much of northern Syria, which the Kurds call Rojava. The YPG played a major role in the eradication of the Islamic State, offering support to U.S. airstrikes. As the major wing of the Syrian Defense Forces (SDF) coalition, the YPG helped liberate Raqqa, the capital of the ISIS “caliphate.” YPG fighters remain in Raqqa, suppressing attacks from the few jihadists remaining in the city.

The Turkish government considers the YPG indistinguishable from the Kurdistan Workers’ Party (PKK), a U.S.-designated Marxist terrorist group. The PKK is active in Turkey, Syria, and Iraq. This week, Turkish President Recep Tayyip Erdogan expanded his government’s claim, asserting that Ankara does not distinguish between the YPG and the Islamic State.

President Donald Trump suggested that he would withdraw all American troops from Syria in the near future in remarks last year, declaring that the Islamic State had been defeated and that its presence in the country was the only legal justification from U.S. military action. Troops remain in the country, however, and the Pentagon has indicated that no sudden pull-out would occur. Such a withdrawal would leave the YPG exposed to a Turkish invasion.

On Wednesday, Foreign Minister Mevlüt Çavuşoğlu suggested that the United States was not merely taking careful measures to ensure the success of the withdrawal, but that its support for the Kurdish militias had made that withdrawal problematic.

The foreign minister went on to say that the Turkish government was planning a military operation in YPG territory and that it would not hesitate to act one the Americans left.

“As we took steps in Afrin, as we took steps with Operation Euphrates Shield west of the Euphrates River to the al-Bab region, so we would never shrink from taking the same steps east of the Euphrates,” Çavuşoğlu stated. The Turkish military entered Afrin, in Rojava, after the U.S. arranged an agreement for the YPG to withdraw from there. Al-Bab is a city in northern Syria that Turkey captured via airstrikes in 2017, establishing it as a stronghold of the Sunni Arab Free Syrian Army (FSA) coalition.

In December, President Donald Trump announced that the U.S. and its allies “have defeated ISIS in Syria, my only reason for being there during the Trump Presidency.” The White House, via Press Secretary Sarah Sanders, later confirmed that the Pentagon had “started returning United States troops home as we transition to the next phase of this campaign.” The announcement caused an outcry among Kurdish supporters and those who wished to see an extended American presence in the Middle East.

Yet weeks later, troops appeared to continue in Manbij, Rojava, with little signs of movement. During a visit to Israel this weekend, National Security Advisor John Bolton told reporters that the U.S. would indeed not move out its troops there without a guarantee that the Turkish military would not use the opportunity to attack the YPG.

“We don’t think the Turks ought to undertake military action that’s not fully coordinated with and agreed to by the United States, at a minimum, so they don’t endanger our troops but also so that they meet the president’s requirement that the Syrian opposition forces that have fought with us are not endangered,” Bolton said.

Erdogan reacted to the remarks, which President Trump appeared to endorse on Twitter, by refusing to meet with Bolton during his visit to Ankara following his Israel stop.

“It is impossible to accept the message given by Mr. Bolton in Israel,” Erdogan said, adding that Turkey would “very soon … act to neutralize terrorist groups in Syria,” meaning Kurdish militias. Erdogan did not offer as harsh a commentary as Çavuşoğlu did for why U.S. troops remain in the country, however, instead expressing confusion that “different levels of the U.S. administration started saying different things after [the Trump announcement].”