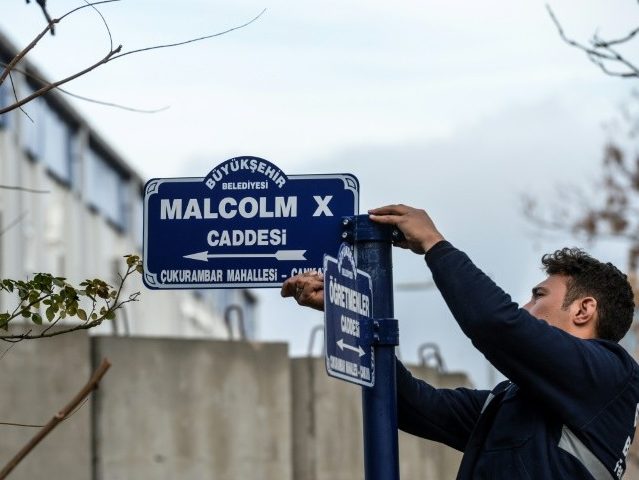 Officials in the Turkish capital of Ankara renamed the street where the United States embassy will soon be located after the late Muslim black nationalist leader Malcolm X, local sources reported Thursday.

On Thursday morning, municipal workers changed the street sign to bear the name “Malcolm X Caddesi” (Malcolm X Street) next to the site of the future embassy in the capital’s Çankaya district, according to the Turkish newspaper Hurriyet. The change took place after the Ankara city council unanimously voted in favor of the name change.

Malcolm X remains one of the most controversial political figures in American history. A self-described black nationalist and a member of the Nation of Islam, he expressed dismay at other civil rights leaders for accepting support from white allies and preaching non-violence. He once said including white supporters in the civil rights movement was like “coffee which is strong and hot until you add cream and then it gets cooler and cooler until you don’t have any coffee.”

He later toned down some of his views after what he described as a life-changing pilgrimage to Mecca, which made him exit the Nation of Islam. The visit caused him to change his views on race and he began to view Islam as a brotherhood, an idea currently popular in modern Turkey. However, his disavowal of the Nation of Islam and racist ideology led to his to assassination at age 39.

He wrote at the time:

There are Muslims of all colors and ranks here in Mecca from all parts of this earth. During the past seven days of this holy pilgrimage, while undergoing the rituals of the hajj [pilgrimage], I have eaten from the same plate, drank from the same glass, slept on the same bed or rug, while praying to the same God — not only with some of this earth’s most powerful kings, cabinet members, potentates and other forms of political and religious rulers — but also with fellow‐Muslims whose skin was the whitest of white, whose eyes were the bluest of blue, and whose hair was the blondest of blond — yet it was the first time in my life that I didn’t see them as “white” men. I could look into their faces and see that these didn’t regard themselves as “white.”

The decision to change the street’s name was first proposed in September, when Turkish President Recep Tayyip Erdogan met with Malcolm X’s daughters in New York during the United Nations General Assembly. Erdogan described Malcolm X as a symbol of “the struggle against racism” in that encounter.

It is not the first time that Turkish authorities have changed the names of streets in an apparent attempt to make a political point against the United States. In February, they renamed the road of the current U.S. Embassy “Olive Branch” after the U.S. expressed opposition over Turkey’s offensive in northern Syria against a U.S.-backed Kurdish militia, codenamed “Operation Olive Branch.”

When the Foreign Minister of the United Arab Emirates (UAE) shared a tweet about the crimes of Ottoman military commander Fahreddin Pasha in January, officials also chose to rename the street to “Fahreddin Pasha Road.”

During Donald Trump’s presidential campaign back in 2015, Turkish leader Erdogan also demanded the removal of Trump’s name from signs around Trump Tower in Istanbul after he proposed a ban on immigration from some volatile, Muslim-majority countries, alleging that Trump has “no tolerance for Muslims in America.” The removal never took place, although last month the Istanbul municipal assembly voted in favor of removing his name from the metro underpass leading to the Trump complex.