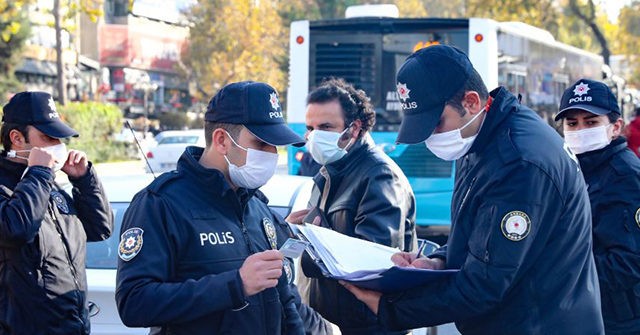 The host of a YouTube opinion program that stops random citizens on the street and asks for their opinions on current events revealed this week that multiple show guests have faced police action for their opinions and that police have also brought him in for “questioning” on his program, the Stockholm Center for Freedom (SCF) reported on Thursday.

The program, Kendine Muhabir (“One’s Own Reporter”), seeks to understand general public sentiment about the government of Islamist President Recep Tayyip Erdogan by tuning into the opinions of average citizens. It faces significant legal challenges in doing so because “insulting the president” is a crime and a civil infraction in Turkey and Erdogan has proven a particularly litigious Turkish president.

Kendine Muhabir has nearly 50,000 subscribers on YouTube, signaling popular demand to hear a variety of opinions outside of what Turkish mainstream media report. While once a thriving media market, Erdogan and supporters with buying power have either shut down or bought out media companies that once reported fairly and critically on the government. Only one major media outlet, the secularist newspaper Cumhuriyet, regularly questions Erdogan’s policies.

“Theirs is a family company. The father is the president, the son-in-law is the finance minister. His father-in-law must have guided him. First of all, the dictatorship must go,” the man said, according to a translation by SCF. “The whole country is out of whack. He [Erdoğan] has 13 planes in Ankara, he sleeps in a 1150-room palace, he has another palace near Lake Van, his son has ships, and he feeds his cronies with taxpayer money.”

Kendine Muhabir noted that police also forced the show’s host to come in for questioning regarding the comments.

“They said I was being egged on, and somebody was making me say these things. Can’t I have my own opinions?” Demirbaş said. “They treated me like a terrorist. They try to intimidate us for defending the Republic of Turkey, but I will continue to say what I believe in.”

Opposition lawmakers are reportedly working to investigate the arrests. A report on Thursday indicated that a member of the People’s Democratic Party (HDP), Hüseyin Kaçmaz, presented a formal parliamentary question regarding the arrests, stating that the Erdogan government has launched over 100,000 police investigations in response to citizens criticizing either Erdogan himself or government officials.

“After he had criticized the economy and the government in a street interview, the house of 49-year-old İsmail Demirbaş was raided and he was taken into custody. Following this detention procedure, he was sentenced to house arrest. After he criticized the government again in a second street interview, this time, he was detained and has been arrested,” Kaçmaz’s letter read in part.

The HDP is a Kurdish-friendly, center-left party that once threatened to take over the Islamist Justice and Development Party’s (AKP) majority in the Turkish Parliament but has met multiple legal challenges from Erdogan’s government following the failed alleged coup attempt against the president in 2016. Police arrested the co-chairs of the party, Figen Yuksekdag and Selahattin Demirtaş, shortly after the failed coup and after the AKP voted to strip lawmakers of parliamentary immunity. Due to its support for the Kurdish minority in Turkey, AKP leaders have accused the HDP of supporting terrorism by having links to the Marxist Kurdistan Workers’ Party (AKP). Demirtaş ran a doomed presidential campaign from prison in 2018.

Turkish authorities regularly prosecute and harass citizens for any perceived criticism of Erdogan. In 2018, a prominent Turkish singer, Zuhal Olcay, was sentenced to ten months in prison for rewriting the lyrics of a hit song during a concert to “Recep Tayyip Erdoğan, it’s all empty, it’s all a lie, life will end one day and you’ll say ‘I had a dream.’”

Şenol Buran, the head cook at the Cumhuriyet office cafeteria, was arrested two years earlier for saying of Erdogan, “I would not serve that man a cup of tea.” Cumhuriyet had faced multiple attacks by angry Muslim mobs at the time for publishing cartoons by the satirical French magazine Charlie Hebdo and for its coverage of Erdogan’s aid to Syrian rebels.

Erdogan attempted to curry public favor in September 2016, two months after the failed coup, by dismissing all cases for “insulting the president” on the docket at the time. The amnesty preceded the raids arresting senior HDP members, however, and thousands have faced legal action for their opinions since.