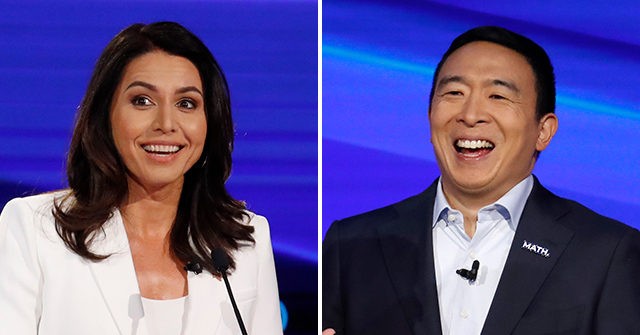 Gabbard led the field of candidates with just under 40 percent of the vote shortly before midnight. The poll showed Yang in second place with 20 percent of the vote, followed by Mayor Pete Buttigieg with eight percent of the vote. Buttigieg attempted to target Sen. Elizabeth Warren (D-MA) during the debate, particularly for failing to explicitly state whether she would raise taxes on the middle class in order to pay for Medicare for All.

Warren came in fourth place, right behind Buttigieg, with seven percent support, despite having more speaking time (roughly 23 minutes) than any other candidate:

Elizabeth Warren spoke the most during tonight’s debate, with 23.1 minutes. Joe Biden, who leads in speaking time across the three previous debates, got 16.6 minutes.

The rest of the field follows, with between 7.2 and 13.2 minutes of air-time. https://t.co/f8GyyhyVVn pic.twitter.com/EgzGFqhpHq

The Drudge Poll — framed with the simple question “WHO WON THE SIXTH DEM DEBATE” — is not scientific in its methodology and does not prevent multiple votes from respondents. However, as with the 2016 Republican primary, its results often indicate genuine enthusiasm from a candidate’s fan base. Corporate media and establishment pundits mocked then-candidate Donald Trump’s consistent Drudge Poll dominance, but those results ultimately matched the results of the race.

Tuesday’s poll shows many of the candidates separated by less than one percentage point.

Sen. Kamala Harris (D-CA), who desperately needed a breakout moment, came in second to last with 1.2 percent support. Julián Castro failed to top one percent as of midnight.

Breitbart News’s own online poll also showed Gabbard as the overwhelming winner of Tuesday evening’s debate, earning 62 percent of the vote as of midnight.