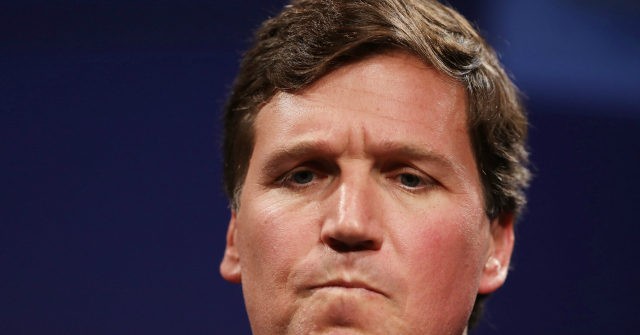 Fox News show host Tucker Carlson on Friday evening responded to the Pentagon’s military brass targeting him after he criticized President Joe Biden for focusing on inclusivity for women in the military while China is focusing on making its young men more masculine.

Carlson explained he was not attacking pregnant women flying military jets but pointing out Biden’s focus on identity politics:

He said the wokeness seen now throughout U.S. government institutions and corporations is “not fine if your only job is to protect the United States from people who want to kill the rest of us. That is the worst kind of dereliction of duty.”

He pointed to one big change Biden has made recently — that the Pentagon would pay for gender reassignment surgery for active-duty personnel.

“How do sex changes in the military make this country safer? That’s not a trick question, it’s another volley in the culture war. It’s the only question that matters — literally. But no one bothered to ask it, probably because no one can remember why the U.S. military exists,” he said. He added:

Here’s a reminder: the U.S. military exists to fight and win wars. That is its only purpose. The U.S. military is not an NGO. It is not a vehicle for achieving equity. It is not a social experiment. It’s definitely not an employment agency; nobody has a God-given right to work in the military. If you ever hear this show whine that Delta Force is discriminating against paunchy, 51-year-old cable news hosts, you’ll know we’ve lost the thread. It’s not about us, it’s about the country. Making people feel valued and included is a good thing, but it is not the point of the U.S. military. It cannot be the point of the U.S. military, or else we’re done.

Carlson then addressed the Pentagon’s response to him. He first noted the military’s strong tradition of maintaining a non-partisan stance and accused the Biden administration of eroding that. He said:

For centuries, our military has been self-consciously non-partisan. In a democracy, it has to be that way. No country can survive if its armed forces become the tool of a specific political party. We know that because it happens all the time, all over the world, and the consequences are always horrifying. It has never happened here.

However, Lloyd Austin is openly political. In his first days on the job, Austin made the entire armed services submit to a kind of political purity test. Anyone with views that he found ‘extreme’ had to leave. The rest of us watched as this happened, and once again, no one said anything. The left approved, the right felt hamstrung because they support the troops. Of course, if you support the troops, you should probably speak up when they’re being abused.

Carlson said to meet the demands of various Democratic interest groups, the Pentagon has dramatically lowered standards in the services.

“They officially deny this, but it’s true. Ask anyone who works there. If you press the spokesmen, they’ll tell you that it’s not a big deal because traditional standards don’t really measure anything,” he said.

“Now, if you dare to point any of this out, they become hysterical because they can’t defend their own policies. When people can’t defend what they’ve done, they yell. They can’t even clearly explain what those policies are, at least publicly. So they attack,” he continued.

Carlson responded to politicians such as Sen. Tammy Duckworth (D-IL), who suggested it is “unpatriotic to question the Pentagon unless you’ve served in the military yourself.”

“Really? Can only cops talk about police brutality? If you haven’t been elected to office, can you criticize Congress? They’re not making a real argument. They’re trying to silence dissent,” he said.

He retorted, “We’re not playing along, sorry. Every American citizen has a right, maybe an obligation, to know what the military they pay for is doing because our lives may depend on it.”

Carlson then addressed the Pentagon’s “large and coordinated public relations offensive” against his show:

Pentagon brass issued hostile statements. People in uniform sent out videos on social media. The DOD even issued a news release attacking us: “Press Secretary Smites Fox Host.” … Since when does the Pentagon declare war on a domestic news operation? We can’t remember that ever happening. But we’re going to pass on that, because this is bigger than a feud with some flack at the Pentagon. This is genuinely worrisome.

The Department of Defense has never been more aggressively or openly political. There are, at present, 2,500 American troops stationed in Afghanistan. They remain there to prevent the fall of Kabul to extremists. Simultaneously, there are 5,000 troops in our own Capitol, also as protection against “extremists,” meaning people who voted for the losing candidate in the last election. Judging by those numbers, the Pentagon is twice as focused on controlling our own citizens as it is on controlling the Taliban.

Carlson touched on his original commentary last week — that China, not domestic extremism, is the biggest threat to the nation:

The main threat we face, as everyone who is honest knows, is the government of China. China is ascendant. Their economy will soon outpace ours. China now has the largest navy on the planet. Why do they have that? Why did they feel the need to build it? Does that have potential consequences for us? Yes.

If China moved against Taiwan, how would we respond? More likely, if the Chinese decided to close international shipping lanes, it would cripple our economy. If they decided to shut down our internet, it would bring our life to a halt. If they decided to occupy Malaysia, that would be a grave concern to the world. If any of these things, or 100 other things that might take place, actually happen, what exactly would our Pentagon do about it? Can the U.S. military still win a real war?