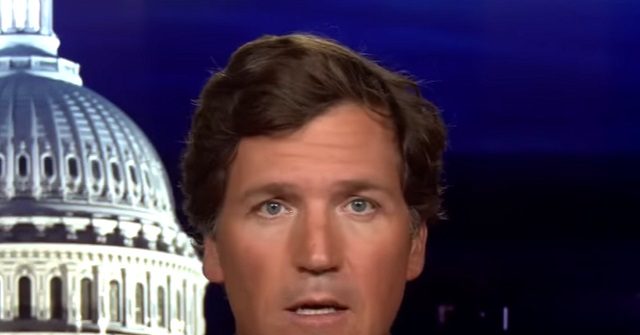 Wednesday on Fox News Channel’s “Tucker Carlson Tonight,” host Tucker Carlson opened his show by explaining the odd approach the left and the media are taking in the lead-up to next month’s presidential election regarding various aspects of the race, including with Democratic presidential nominee Joe Biden.

Carlson said it was especially true with Biden son Hunter Biden’s laptop, which is being downplayed as “Russia disinformation.”

CARLSON: So as you can tell, even by the standards of a late October Thursday in a presidential year, there’s an awful lot going on. Donald Trump and Joe Biden meet for their final debate tomorrow in Nashville, for example.

In a normal year, that would be considered a very big deal. Presidential debates give voters critical information about the candidates in the days before an election. They used to be considered a good thing, an essential part of our civic life, but it’s not anymore.

This year, the Debate Commission has decided to cut the participants’ microphones if they talk too much. So you won’t be able to hear the people you’re supposed to be voting for in a week and a half when they speak. That’s an odd decision. But in a way, it makes perfect sense, given the moment.

If there’s a unifying theme on the left right now, it’s that more information is bad. It’s scary. Voters shouldn’t know too much. They have no right to know. So stop with your imperious questions about what’s happening around you, questions about George Soros or mandatory flu vaccines or BLM’s long term agenda for your children. Stop.

And above all, please shut up about Hunter Biden’s laptop. Stop. Not another word about that.

This is not a suggestion, by the way. It is an order and it has been delivered by the most powerful people in the world: Silicon Valley billionaires, the news media, the Federal spy agencies, even Borat himself.

All of these people, every one of them wiser and much richer than you are, would like you to know that there is no reason to ask a single question about the documents on Hunter Biden’s computer and there are countless reasons not to ask.

For starters, it’s all Russian disinformation. It was planted by Vladimir Putin himself to discredit Washington lobbyists who honestly have done nothing wrong. The documents are also quote “hacked material.” That means that not only are they fake, but someone stole them. You want to be party to theft? I didn’t think so.

And while we’re at it, you should also know that Rudy Giuliani could very well be a sex offender, and that means that Hunter Biden’s e-mails cannot be real.

You start to get the picture here? No more questions, America. Curiosity killed the cat, if you know what we’re saying.

If you care to keep your social media privileges to live in this country, you won’t say a word about the laptop. Just ask “The New York Post” what happens when you get uppity and start thinking the First Amendment is real.

It’s instructive, too. What we’ve really learned is that the class system in this country is real, more real than we ever knew.

If you’re a member of the group that’s in charge right now, you can do pretty much whatever you want. Jeffrey Epstein understood that early on. When you’re on the right team, you can publish someone else’s tax returns or private phone calls and no questions will be asked. Is that legal? Who cares? Laws don’t apply to you?

You could literally broadcast your sexual fetish live on a Zoom call and keep your job at CNN. You went to Harvard. You’re too important to fire. Relax. It’s not like you’re a prowl or think that all lives matter. So those are the new rules.

If you’re on the wrong team, and many are, it can be frustrating to watch all of this because you know, deep down that if you dared to behave like these people behaved, you’d be in very deep trouble. You can feel hopeless after a while.

But then out of the blue, something will happen to remind you that actually there is hope. Why? Because people this awful cannot rule this country forever. They’re not capable of it. They are too arrogant. They’re too stupid.

How stupid are they? Stupid enough to let their hypocrisy show.

In the end, that will be their undoing. You cannot impose rules you refuse to follow. People will not put up with that overtime. It’s too infuriating. And yet these people can’t help themselves.