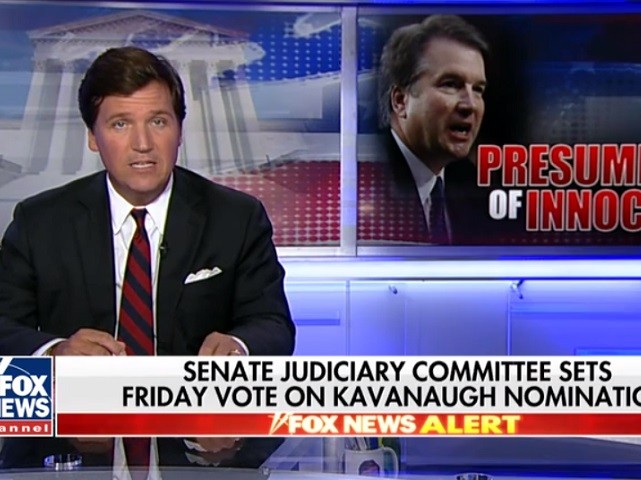 Tuesday on Fox News Channel’s “Tucker Carlson Tonight,” host Tucker Carlson warned of the dangers of the mob mentality facing Supreme Court associate justice nominee Brett Kavanaugh and what it meant for the future of American society’s interpretation of the presumption of innocence.

According to Carlson, bypassing that norm is a product of Democrats seeking to thwart Kavanaugh’s confirmation to the high court, which he noted comes at a price.

“It’s worth saying that most Democrats in Washington don’t really hate Kavanaugh personally,” Carlson explained. “He’s hardly an abrasive character, as you learned if you watched his interview with Martha [MacCallum] last night. There’s nothing personal about any of this. Kavanaugh stands between the Democratic Party and the power it seeks. He is in the way. He must be crushed – in this case, along with his wife and his two little girls. Sorry, that’s the cost of winning. No omelets without some broken eggs.”

“The problem is that outside party headquarters in D.C., people out there don’t understand this,” he added. “When they hear a U.S. Senator call Brett Kavanaugh a sex criminal, they believe it. Why wouldn’t they believe it? Because that’s the only other thing that never changes, ever — human nature. There’s a mob instinct in people — a gut-level desire to worship the powerful and hurt the undesirable. It’s always there, in every population in every country from the beginning of time until now.”