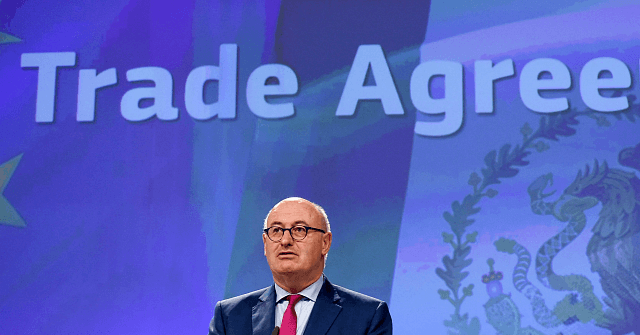 (AFP) — The EU’s top trade official heads to Washington on Tuesday on a sensitive mission to mend ties with the United States and end several years of protectionist battles.

Trade Commissioner Phil Hogan’s most urgent task will be to defuse a row over a French digital tax that Washington has pledged to avenge by imposing duties on $2.4 billion of French goods.

EU-U.S. trade relations have deteriorated since President Donald Trump came to power three years ago and declared a war against the yawning trade deficit with Europe.

“The trip will be an opportunity to find common ground and hopefully potential solutions to some of the problems we have been discussing over the past weeks and months,” a European Commission spokesman said Monday.

“In a nutshell, we expect this engagement to be a stepping stone in an effort to refresh and invigorate a positive transatlantic trade relationship,” he said

Hogan will sit down with U.S. Trade Representative Robert Lighthizer, Secretary of Treasury Steve Mnuchin and Secretary of Commerce Wilbur Ross as well as members of Congress, the EU said.

The earliest transatlantic skirmish came when Trump imposed tariffs on steel and aluminium imports, notably from the EU, which responded by taxing iconic U.S. products, including denim jeans and motorcycles.

Trump has also been threatened duties on European cars, which is of particular concern to Germany, but has so far backed down under the pressure of U.S. Congress.

Finally, the World Trade Organization (WTO) has authorised Washington to impose punitive taxes on $7.5 billion of European products, part of the decades-long dispute over European subsidies to Airbus.

The EU, which accuses Boeing of receiving U.S. subsidies, plans to retaliate once it has received the green light from the WTO, probably later this year.

The visit by Hogan comes the same week that the US is expected to sign a trade truce with China after their row destabilised the world economy.

The EU has sought to engage the U.S. on jointly fighting Chinese protectionism, but has so far failed.

With Friends Like These: EU Threatens to SUE the UK if Trump Exempts British Steel Industry from Tariffs https://t.co/3DoJoBhjlR