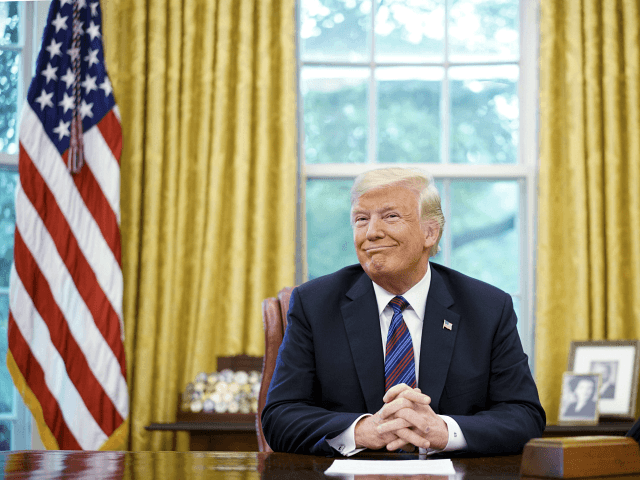 Higher tariffs resulted in a smaller budget deficit in the first quarter of fiscal 2019, which confusingly lasts from October through December of last year, offsetting the decline in revenue from the corporate tax cuts.

The deficit rose, however, due to much higher levels of outlays compared with a year ago, monthly numbers from the Congressional Budget Office showed on Wednesday.

Federal receipts were up just $2 billion to $771 billion. As a result, the quarterly deficit grew by $92 billion to $317 billion.

Individual income tax collections fell by $17 billion, around 4 percent, Despite the deep cuts to tax rates enacted in 2017, withholding tax revenues fell by just $6 billion.  That indicates that lower tax rates in individuals was largely offset growth in wages and salaries in 2018. Payroll tax revenue, which was not subject to tax cuts, grew by around $15 billion due to that growth.

Combined payroll and income withholding revenue fell by just $1 billion. In other words, growth paid for the individual tax cuts.

Revenue from taxes on corporate profits declined by $9 billion or 15 percent due to the deep cuts in corporate tax rates. The 2017 tax act lowered the income tax rate for most corporations to 21 percent from the prior top statutory rate of 35 percent.

The decline in corporate tax revenue, however, was nearly entirely offset by a rise in tariff revenue. These jumped by $8 billion, largely because of new tariffs on steel, aluminum, and Chinese imports imposed by the Trump Administration last year.

The Federal Reserve contributed to the higher deficit in two ways, both by lowering revenue and forcing federal outlays higher. First, the Fed’s payments to the Treasury declined by $5 billion largely because it raised the interest it pays to banks on their reserves, leaving the Fed with less income to remit. Second, higher interest rates meant the federal government had to pay more interest on its debt. Interest payments rose by $16 billion compared with the period a year earlier.

The next biggest source of increased outlays were payments of Social Security benefits, which rose $12 billion. Medicare and Medicaid spending jumped by $3 billion and by $2 billion, respectively. Military spending rose by $9 billion. Spending by the Department of Veterans Affairs increased by $5 billion.

Fiscal year i2019 will be the first to fully incorporate the tax cuts passed by Congress and signed by President Donald Trump in 2017. The first quarter’s numbers show that tax receipts have not declined but are in fact rising, albeit at a slower pace than spending. Which means that thanks to the economic acceleration of 2018, tax cuts are close to achieving the Trump administration’s porjection that they would pay for themselves.

Despite the objections from some economists who think the government should confine deficit spending to periods of recession, it is not unusual for deficits to rise in times of economic growth. In fact, an accelerating economy is often accompanied by rising deficits.