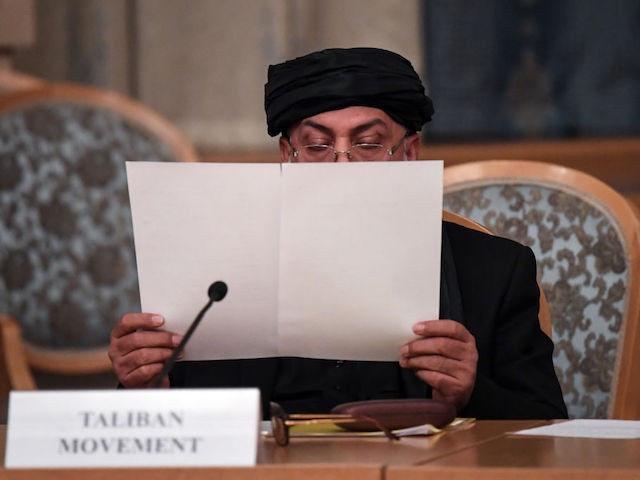 The Trump administration has made “reconciliation” between Kabul and the Taliban the primary tenet of its strategy to end the conflict, raging since October 2001 at an estimated cost of nearly $1 trillion as well as a human toll of 2,272 U.S. military fatalities and 20,412 injuries, mostly at the hands of the terrorist group.

This week, amid increased U.S. efforts to pressure the terrorist group to engage in peace negotiations with Kabul, the Taliban claimed responsibility for killing three American service members and wounding three others in the eastern Afghan city of Ghazni.

Trump officials have come out in support of Afghan President Ashraf Ghani’s unconditional offer to the Taliban of a cease-fire and legitimacy as a political group.

“We do look toward a victory in Afghanistan,” U.S. Secretary of Defense Jim Mattis declared in March, adding, “Not a military victory — the victory will be a political reconciliation” with the Taliban.

Taliban narco-jihadis, who already control more territory than during any other time since the American military removed it from power in 2001, have been locked in a stalemate with U.S. troops for years now.

The magnitude of the Afghan Taliban’s manpower and influence has reached historic proportions despite the record number of airstrikes against jihadis in Afghanistan under President Trump, which stood at a record 5,213 bombs so far this year.

Ghani’s offer of political recognition and a truce to Taliban is the “best opportunity to end” the war in Afghanistan, U.S. Gen. John Nicholson, then the top commander of American and NATO troops, added in April.

On Wednesday, Afghan President Ghani reportedly announced that his administration has formed a 12-member team to hold peace talks with the Taliban.

The Trump administration is reportedly exploring the idea of pushing back the looming Afghan presidential elections, scheduled for April.

“Under this scenario, an interim government could include a Taliban representative, and this possibly could open the way for the Taliban to enter into full-fledged peace negotiations, as it has long maintained that the existing Afghan government and constitution are illegitimate,” NBC News reported this week, referring to the Trump administration possibly pushing Kabul to suspend the elections.

An assessment of the U.S. mission in Afghanistan published by the Pentagon’s office of the inspector general (OIG) on November 19 acknowledged that the end state of Trump’s Afghanistan strategy is to pressure the Taliban to reach a “political settlement” with Kabul.

The report, which covers the quarter from July 1 to September 30, noted:

Under the [Trump administration’s Afghanistan] strategy, the U.S. Government has increased the amount of troops and equipment in Afghanistan, increased offensive strikes against the Taliban, expanded training and assistance for Afghan forces, and sought to pressure Pakistan to eliminate terrorist safe havens. Overall, the strategy seeks to drive the Taliban to enter into negotiations for a political settlement. … Despite continued efforts and activities, there was little clear progress toward reconciliation during the quarter.

In July, the U.S. Department of State (DoS) appointed Amb. Zalmay Khalilzad, an Afghan national, to serve as Special Representative for Afghan Reconciliation as the Trump administration ramped up its peace-seeking efforts.

Khalilzad is “testing all channels” and talking to as many top Taliban terrorists as possible “as he tries to launch peace negotiations to end the war before Trump can simply pull the plug and order U.S. troops home,” NBC News reported.

“Former officials said the current peace effort showed more promise than a previous U.S. attempt under President Barack Obama, which was plagued by turf battles inside the administration and ambivalence among military commanders, who favored hammering the Taliban on the battlefield before entering into any serious talks,” the news outlet conceded.

Amid the Trump administration’s intensified peace-seeking efforts, a spike in violence at the hands of the Taliban has occurred, a testament to gains in strength made by the terrorist group on the battlefield.

According to the U.S. Special Inspector General for Afghanistan Reconstruction (SIGAR), terrorist groups, primarily the Taliban, control or contest 45 percent of the war-ravaged country.

Independent and government assessments show that the Taliban’s strength and influence have reached unprecedented levels.

Citing U.S. Forces – Afghanistan (USFOR-A) in its quarterly report, the Pentagon’s IG approximated the strength of the Taliban and its Haqqani Network allies to stand at between 28,000 and 40,000 fighters.

Bill Roggio from the Foundation for Defense of Democracies (FDD) think-tank dismissed the estimate, noting “Once again, the U.S. military has grossly underestimated the size and scope of the Taliban, despite battling the group head-on for the last 17 years.”

Still, 45 percent say the U.S. made the right decision in invading Afghanistan, while 39 percent believe it was the wrong move.

U.S. Secretary of State Mike Pompeo has noted that everything, including the presence of U.S.-NATO-led troops, is up for discussion in Afghanistan.

Marking a significant shift in U.S. policy long sought by the terrorist group, the Trump administration is engaging directly with the Taliban to end the Afghanistan war.

“Both the Defense Department and State Department are acting as if withdrawal is on the table, sooner or later,” Thomas Joscelyn from the FDD think-tank told NBC News.