President Donald Trump’s deputies have announced they will soon cancel the work permits which were awarded to 100,000 foreign visitors under a controversial outsourcing program created by President Barack Obama.

The planned November announcement of the cancellation will be a boost to millions of U.S. professionals — young and old — who lose opportunities, jobs, and salaries to the many visa-workers imported by companies and investors.

Many U.S. graduates have already lost jobs and salaries because the federal government allows U.S. companies to outsource their jobs to a low-wage workforce of roughly 1.5 million imported college-graduates. The foreign workers — nearly all of whom are Indian or Chinese — get their work permits via several visa programs, including the H-1B and L-1 visa programs.

“Obama had no authority to make the [H4EAD work-permit] rule, and there was never any studies or research performed to see how the rule would affect American workers,” said Dawn Casey, who helps run the Protect US Workers advocacy group. She continued:

Most Americans had no idea Obama had given work permits to the spouses and children of foreigners on H1B visas. The work permits to over 100,000 spouses of H1B foreigners was done quietly by an Executive Order. It became very apparent in 2016 that something had changed as it became very noticeable that laid off American co-workers were having a very hard time finding another job.  During this time there were many reports of Americans training their foreign H1B replacements. These types of reports should have prompted an Executive Order to protect the American training their foreign replacements, not reward the spouses of the foreigners on H1B visas with work permits.

The program is called the H4EAD program because it provides Employment Authorization Documents to people who get H4 visas, which are allocated to the spouses of H-1B visa-workers who have won initial approval to become immigrants.

“We definitely want to prioritize the American worker first and make sure that we have a merit-based system that protects … the American worker,” DHS spokeswoman Katie Waldman told Breitbart News Sunday on Oct. 21. “We want an American immigration system that puts Americans first, and for a long time now. that has not happened,” she added.

Federal rules for drafting regulations require officials to provide advance notice of their regulations to invite public comments and to sketch out the costs and benefits. The H4EAD announcement by DHS’ U.S. Citizenship and Immigration Services division said the H4EAD program is being dropped because it clashes with Trump’s “Hire American” policy, adding:

DHS anticipates that there would be two primary impacts that DHS can estimate and quantify: the cost-savings accruing to forgone future filings by certain H-4 dependent spouses, and labor turnover costs that employers of H-4 workers could incur when their employees’ EADs are terminated. Some U.S. workers would benefit from this proposed rule by having a better chance at obtaining jobs that some of the population of the H-4 workers currently hold, as the proposed rule would no longer allow H-4 workers to enter the labor market early.

The USCIS division is run by L. Francis Cissna. 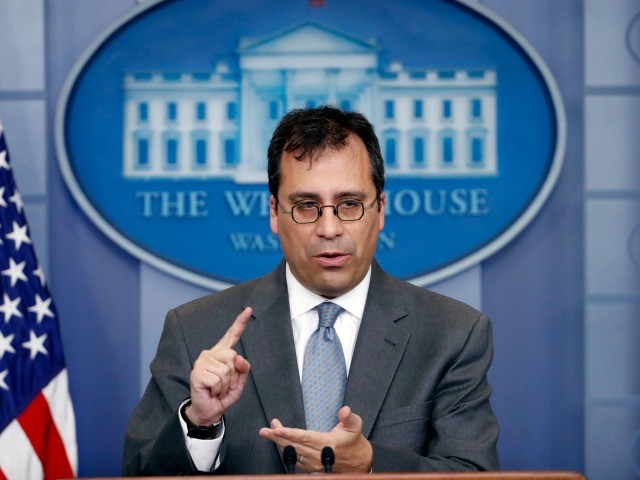 Understandably, employers are protesting the program’s end by arguing it will disadvantage their visa-workers and hinder their access to labor. For example, FWD.us, a D.C-based group of wealthy investors, is backing the H4EAD program which provides them with cheaper white-collar workers:

The H-4 rule is common sense: it lets the spouses of highly-skilled immigrants work once they have begun their wait for legal permanent residence. There is no evidence to show that the H-4 rule harms American workers in any way. Read more here.

Foreign visa-workers are usually willing to accept very low wages for middle-class jobs in the United States because the pay and working conditions are better than they can get in their home country. Also, many of the visa workers work for cheap to get the hugely valuable deferred-compensation bonus of government-gifted citizenship for themselves, their families, chain-migrant relatives and all of their descendants.

Trump deputies at DHS have been evasive about their reasons for canceling the H4EAD program which was created in 2015 by Obama.

One reason for the evasiveness is that senior officials at DHS are trying to keep judges from examining whether Obama violated migration laws when he created the program.

If a judge were to strike down the H4EAD program by rejecting Obama’s claim about 1324a, the judge could wreck the huge, business-backed DACA and OPT programs.

The Immigration Law Reform Institute is suing to overturn the 1324a claim, but White House officials and multiple judges have managed to delay and divert the pending lawsuit for more than 10 years.

Business groups have also delayed a proposed reform of the overall H-1B program which would pressure companies to hire Americans instead of visa-workers. The reform is now delayed until August 2019.

Overall, the Washington-imposed economic policy of economic growth via legal immigration and illegal migration shifts wealth from young people towards older people by flooding the market with cheap white-collar and blue-collar foreign labor.