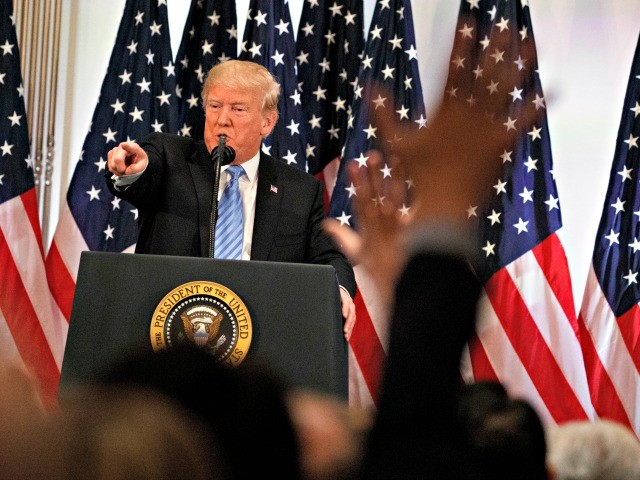 President Trump told a reporter from the New York Times to thank him for the success of the paper during a press conference in New York City Wednesday.

Trump called on New York Times reporter Mark Landler, then joked, “I would have gotten a bad story in the New York Times, but I will anyway, so I guess it doesn’t matter. We’ll do you after, and then we’ll call it quits.”

“We’re kind of thriving, not failing these days,” Landler said, responding to Trump, who often says the New York Times is “failing.”

“I think I’ll stop short of that,” Landler said.

“You know, all my life, I’ve have had very few stories, but I’ve had some on the front page of the New York Times. Now I think I average about three or four a day, right? Of the three or four, they’re all negative–no matter what I do, they’re negative. But you know what? That’s okay. I still love the paper. Go ahead,” Trump said.

Landler then asked a question about Trump’s earlier assertion that China is trying to meddle in American politics.

Trump’s Wednesday press conference was full of combative moments between him and the media. CNN’s Jim Acosta was called on by Trump, and then told Trump that he should be calling on women reporters instead.

“If you don’t mind, after I’m finished, if…one of our female colleagues could go after me, that would be great. Mr. President, just to follow up on…” Acosta said.