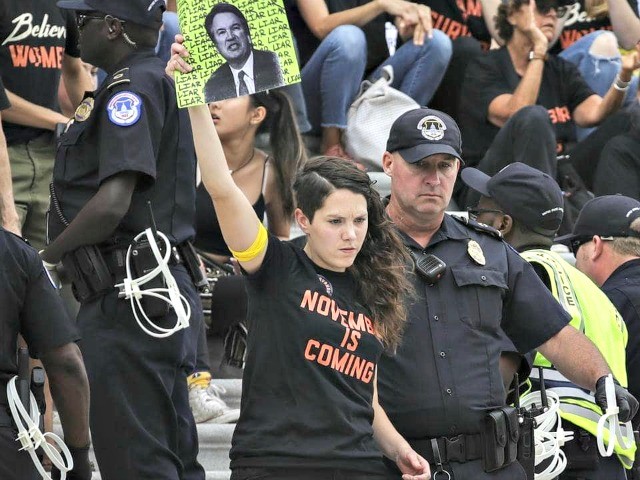 President Donald Trump rallied supporters in Topeka, Kansas Saturday night with the charge that they have the opportunity on midterm Election Day to render their own verdict on Democrats conduct throughout the Brett Kavanaugh Supreme Court confirmation.

“But each of you will have a chance in just four weeks to render your verdict on the Democrats’ conduct, at the ballot box. Gotta vote,” Trump told the extremely enthusiastic crowd. “On November 6 you will have the chance to stop the radical Democrats – and that’s what they’ve become – by electing a Republican House and a Republican Senate. We will increase our majorities. We need more Republicans.”

“We have been energized,” said Trump to a crowd loud in their cheers amidst a sea of waving signs. “If Democrats are willing to cause such destruction in the pursuit of power, just imagine the devastation they would cause if they ever obtained the power they so desperately want and grab.”

“You don’t hand matches to an arsonist and you don’t give power to an angry left-wing mob and that’s what they’ve become,” said President Trump. “The Democrats have become too extreme and too dangerous to govern. Republicans believe in the rule of law, not the rule of the mob.”

“If Democrats take control, they will try to plunge our country into gridlock, poverty, and chaos and that’s what’s going to happen,” Trump declared. “The Democrats want to significantly raise your taxes. Essentially they want to impose socialism, Venezuela, dismantle law enforcement, and eliminate our borders. They want to have nice, open borders. No way.”

“The Democrats have become the party of crime,” the president said as he has several times in recent days. “Republicans are the party of law and order and justice …t he party of opportunity and wealth.”