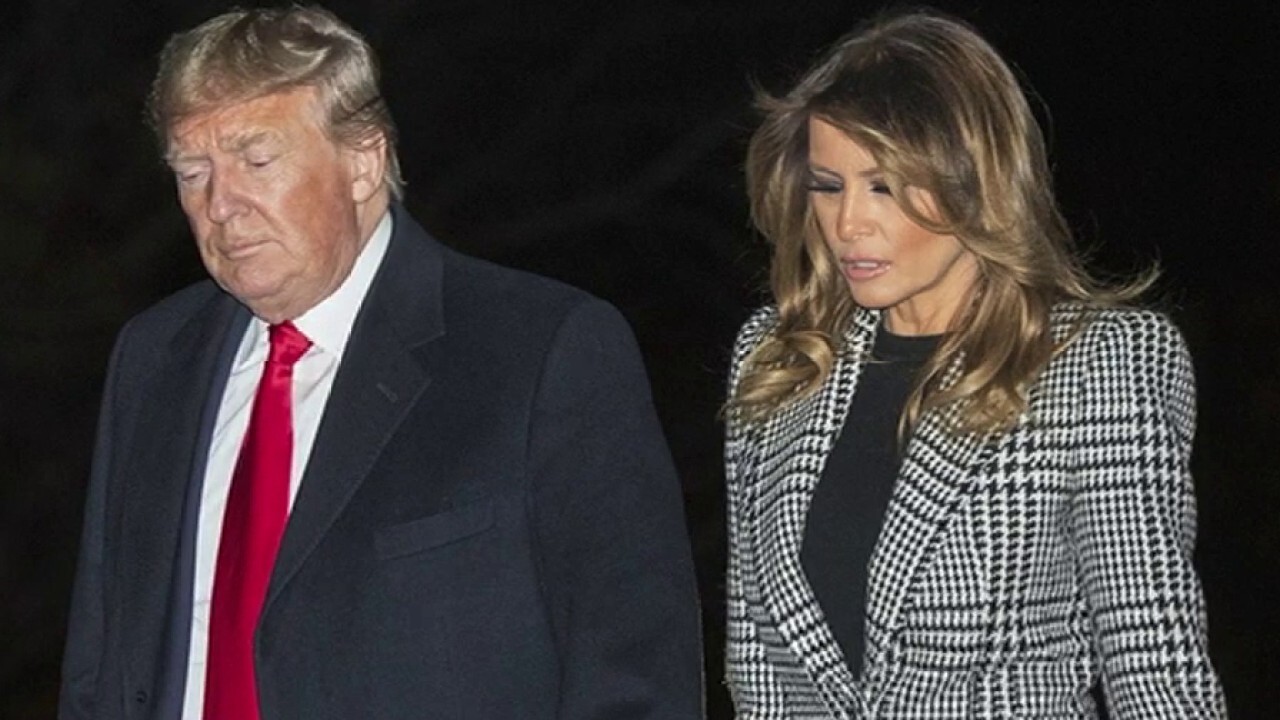 President Trump tested positive for the coronavirus early Friday morning, throwing the state of the 2020 presidential campaign and potentially much more in Washington into question.

The president announced his diagnosis in a tweet and said that he and first lady Melania Trump, who also tested positive, would quarantine together.

“Tonight, @FLOTUS and I tested positive for COVID-19. We will begin our quarantine and recovery process immediately. We will get through this TOGETHER!” Trump said.

Trump, 74, is reportedly not experiencing symptoms as of Friday morning. Given his age, the president is most at risk from getting ill, but the vast majority of people in his group still recover from the virus. Additionally, other White House staffers in the past have tested positive for the virus, including an aide to Vice President Pence and national security adviser Robert O’Brien.

Here is a timeline of developments around the president’s coronavirus diagnosis.

Pence was with Trump in the Oval Office on Tuesday morning. Both he and the president are tested daily. There has been no word on Pence’s most recent coronavirus test.

Trump participated in a presidential debate with Democratic nominee Joe Biden. At this point neither the president, the first lady nor Hicks were showing symptoms.

Trump flew in the afternoon to Minnesota, where he participated in a closed-press fundraising committee reception before delivering remarks at a campaign rally at Duluth International Airport. According to a source familiar with what happened that night, Hicks began showing coronavirus symptoms either during or after the event in Duluth.

Hicks was quarantined during the Air Force One flight returning from Minnesota.

Hicks tested positive for the coronavirus on Thursday morning. News broke of her positive test late Thursday evening. The White House released a statement that did not name Hicks but said Trump takes the health of himself and White House staff “very seriously.”

“The President takes the health and safety of himself and everyone who works in support of him and the American people very seriously,” the statement from White House spokesman Judd Deere said. “White House Operations collaborates with the Physician to the President and the White House Military Office to ensure all plans and procedures incorporate current CDC [Centers for Disease Control and Prevention] guidance and best practices for limiting COVID-19 exposure to the greatest extent possible both on complex and when the President is traveling.”

Trump then called in to “Hannity” on Fox News during the 9 p.m. hour, during which he acknowledged Hicks’ test and said that he and the first lady had been tested.

“I just went out for a test … it will come back later I guess, and the first lady also because we spend a lot of time with Hope,” Trump said.

He added: “It’s very hard when you’re with soldiers, when you are with airmen, when you’re with the Marines, and the police officers, I’m with them so much. And when they come over to you, it’s hard to say, ‘stay back, stay back.’ You know, it’s a tough kind of a situation, it’s a terrible thing… I just went for a test, and we’ll see what happens. I mean, who knows … I was surprised to hear with Hope.”

“Hope Hicks, who has been working so hard without even taking a small break, has just tested positive for Covid 19. Terrible! The First Lady and I are waiting for our test results. In the meantime, we will begin our quarantine process!” Trump said.

At 12:54 a.m., Trump tweeted that he and the first lady tested positive for the coronavirus. The White House confirmed the news a few minutes later.

“Tonight, @FLOTUS and I tested positive for COVID-19. We will begin our quarantine and recovery process immediately. We will get through this TOGETHER!” Trump said.

At 1:05 a.m. the White House physician released a memo that Trump had tested positive.

“This evening I received confirmation that both President Trump and First Lady Melania Trump have tested positive for the SARS-CoV-2 virus,” White House Physician Sean P. Conley wrote. “The President and the Frist Lady are both well at this time, and they plan to remain at home within the White House during their convalescence.”

During the 1 a.m. hour, the White House released Trump’s updated schedule for Friday, which canceled a planned trip to Florida but left on the schedule a phone call on coronavirus support for vulnerable seniors.

“The White House medical team and I will maintain a vigilant watch, and I appreciate the support provided by some of the country’s greatest medical professionals and institutions,” the memo continued. “Rest assured I expect the president to continue carrying out his duties without disruptions while recovering, and I will keep you updated on any future developments.”

During the 2 a.m. hour, the White House confirmed that White House chief of staff Mark Meadows, who is among a number of aides who are in daily contact with the president, tested negative for the coronavirus in his most recent test.

Secretary of State Mike Pompeo, who has been traveling in recent days and has not interacted with Trump since Sept. 15, said that he tested negative for the virus later Friday morning as well.

A senior defense official told Fox News on Friday morning that there has been “no change to the posture” of the U.S. military and that Trump “remains the commander-in-chief.”