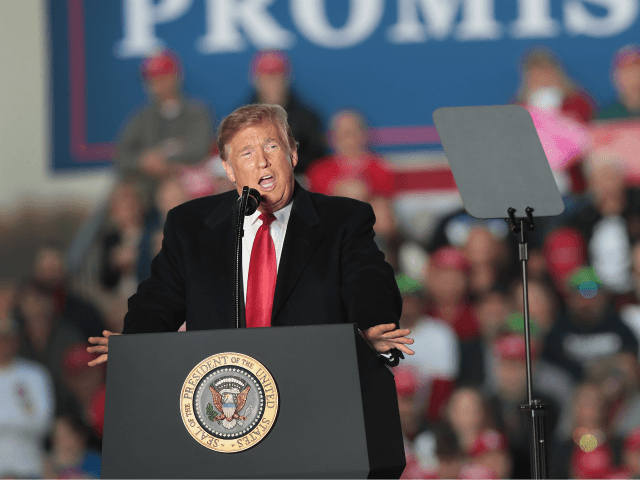 President Donald Trump rallied supporters Saturday evening in Illinois, telling the gathered thousands he chose not to cancel the event, calling out “never again” and advocating for the death penalty.

“The hearts of all Americans are filled with grief following the monstrous killing of Jewish Americans at the Tree of Life Synagogue in Pittsburgh, Pennsylvania,” the president said opening the event. “The scourge of anti-semitism cannot be ignored, cannot be tolerated, and it cannot be allowed to continue.”

President @realDonaldTrump, “The scourge of antisemitism cannot be ignored, cannot be tolerated, and it cannot be allowed to continue…those seeking their destruction, we will seek their destruction…we must draw a line in the sand, and say very strongly, never again.” pic.twitter.com/10HmdfUsLc

“Those seeking [the Jews’] destruction, we will seek their destruction,” He called for bringing back the death penalty for those who perpetrate such crimes.

“We must draw a line in the sand, and say very strongly, never again,” said Trump. He sent prayers to those affected and the law enforcement officers who risked their lives and sustained serious injuries during Saturday morning’s attack.

“We trust in God,” he said to great cheers from the crowd. “We protect the freedom of worship and we believe in the power of prayer. We defend our Constitution. We defend our heritage and we rally around our great American flag.”

Trump called the 2018 midterm election perhaps the most important ever “because we’ve made so much progress, we don’t want to give up that progress.”

He then said he chose not to cancel his speeches Saturday to the Future Farmers of America  and the Illinois rally because “I don’t want to change our life for somebody that’s sick and evil and I don’t think we ever should.” Trump did tell the crowd he was going to tone down the rally just a bit in light of the morning’s tragedy.