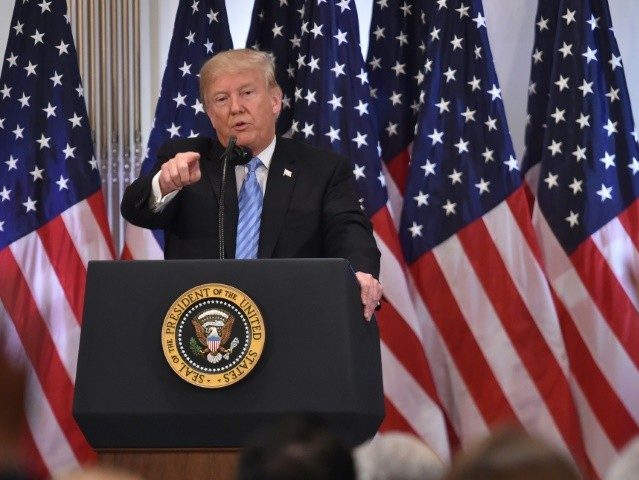 Speaking to reporters at a press conference in New York on Wednesday, President Donald Trump responded to questions from multiple Kurdish reporters, who sought details in how the Trump administration would help Kurdish governments in Iraq and Syria protect themselves from radical Islamic groups and hostile neighbors.

Trump did not offer any concrete answers, but repeatedly stated that his administration is “going to be discussing that situation” and that the Kurds were “great people, great fighters, I like them a lot.”

Trump first took a question from Majeed Gly, the New York bureau chief of the Kurdish news network Rudaw, who he congratulated on identifying as a Kurd. Gly asked what, specifically, Trump’s administration would do to support Kurdish people in Iraq and Syria as the Islamic State threat waned.

As for the future, “we’re going to be discussing that situation.”

Trump also took a second question from a Kurdish reporter, who asked what the future of the Kurdish-U.S. relationship was after the full collapse of the Islamic State.

“We are trying to help them a lot, don’t forget that’s their territory, I want to help them,” Trump replied. “They fought with us, they died with us, we lost tens of thousands of Kurds fighting ISIS. … They’re great people and we have not forgotten, I don’t forget.”

The Kurdistan Regional Government of Iraq (KRG) and its military, the Peshmerga, were instrumental in fighting the Islamic State in that country. In Syria, the United States partnered with the People’s Protection Units (YPG/YPJ) to liberate the “capital” of the Islamic State caliphate, Raqqa, and have relied on their on-the-ground expertise for years.

Following a non-binding referendum on independence in Iraq a year ago, however, the Trump administration did nothing as Baghdad responded by occupying Kurdish-held territory. Iraqi officials, partnering with Iran-backed militias known as the Popular Mobilization Units (PMU/PMF), overran Kirkuk, a multi-ethnic city the Peshmerga had kept from ISIS hands after the Iraqi army fled. At the time, Trump stated that the U.S. would not be “taking sides” between the Iranian proxy forces and the longtime U.S. allies.